Pulling the plug on technology - and surviving to tell the tale

Pulling the plug on technology - and surviving to tell the tale 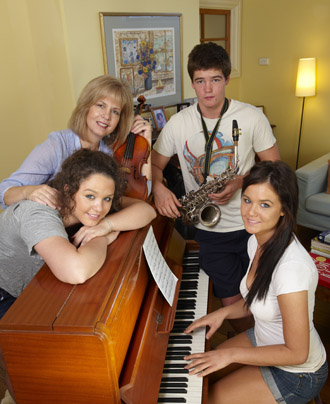 Susan Maushart, second from the left, banned all screens from her house including smartphones, iPods and televisions for six months. Above, her three teenage children, Sussy (left), Bill (center) and Anni Christensen. Provided by Susan Maushart

For Susan Maushart, getting her three teenage children to the dinner table became a recurring battle. Anni, Bill and Sussy, who are dwelling in what Susan has dubbed “iParadise,” often “do their homework” with more than seven tabs open on the Internet browser - one streaming YouTube clips, another accumulating spring clothing in an online shopping cart and the last blowing up with instant messages from some 47 different friends.

When they began speaking in cyberlanguage - saying “LOL” instead of actually laughing out loud - the columnist with a PhD in media ecology pulled the plug on her household, banning all smartphones, computer devices and televisions. Miraculously, none perished from withdrawal.

In “The Winter of Our Disconnect: How Three Totally Wired Teenagers (and a Mother Who Slept with her iPhone) Pulled the Plug on Their Technology and Lived to Tell the Tale,” Maushart chronicles her family’s six-month social experiment, reflecting on their estrangement from RL, or real life. 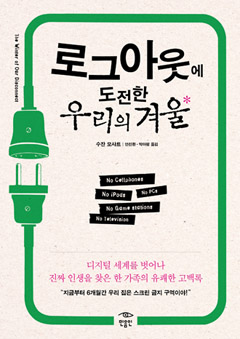 The cover of the Korean-language version of “The Winter of Our Disconnect: How Three Totally Wired Teenagers (and a Mother Who Slept with Her iPhone) Pulled the Plug on Their Technology and Lived to Tell the Tale.” Provided by Minumin Publishing

With glowing screens lighting up every room, Maushart realized her family spent less time together. She also grew concerned with frequently waking up while spooning with her iPhone.

Her first move bordered on extreme. Before going screenless, Maushart decided to live without electricity for two weeks, sending unplugged shockwaves through the lives of her wired teens. In the long-run, power was restored, but the gadgets remained in exile.

The hilarious, insightful and informative book reveals the dangerous side of modern technology. Maushart’s experience supported statistics about the negative effects of the frequent consumption of media and use of digital gadgets.

The book, recently released in Korean, was chosen as one of the Korea Publication Ethics Commission’s books of the month for April. In one of the most wired nations in the world, with seemingly every Korean gazing into tablet PCs or tapping on smartphones on the subway, in an elevator or walking down the street, Maushart’s message is certainly relevant on the peninsula.

The Korea JoongAng Daily recently talked to Maushart, who lives in Long Island, New York, via e-mail. Excerpts from the interview follow.

Q. As you wrote in your book, your children live in iParadise. How was it possible to take part in such an abrupt experiment, living without electricity for two weeks as a prelude and then without screens for six months?

A. The conviction that life is unlivable, unthinkable, without 24/7 Internet access and cellphone coverage is deeply held. It is also deeply delusional. It was possible to switch gears abruptly because digital natives do not have different brains, just different habits. We are all so much more flexible than we think we are. We build cages for ourselves based on assumptions about what we must have in order to live well - which is basically more of what we already have.


Unlike Sussy, Anni and Bill seemed to have adapted to their offline living. Did you ever think they actually needed someone to put up barriers in order to force them to change their habits?

Yes, I believe in many ways children are looking for somebody to put boundaries around their media use. It is not all Angry Birds and awesome viral videos. Beneath the nonstop fun of social networking, children and teenagers experience a huge amount of anxiety.

The presentation anxiety that goes with creating, grooming and maintaining profiles, the FOMO (“fear of missing out”), the constant pressure to connect with one’s network (or else!) - this takes its toll. As does, of course, the sheer amount of time one has to devote to all of this - time that must necessarily be subtracted from the rest of life. (IS there a rest of life?)

Many people use digital gadgets in order to stave off boredom. You and your children eventually found ways to spend time without the aid of screens. Did you ever regret embarking on the experiment, and if so, at what point?

I did have a bad moment when I realized we would be taking cold showers for two weeks (during the “blackout” phase). And having to accept Sussy’s decision to move to her Dad’s was much, much worse. Awful. But I was still strong in my resolve that I was doing the right thing - that the benefits would ultimately make the sacrifices worthwhile. So, there were no regrets apart from momentary ones.

You recalled in your book that some considered your social experiment an attempt to alienate your children - removing them from the Internet in the Information Age. Many parents also believe that the Internet has become an integral part of students’ education and studying habits. How did you cope with these criticisms and conflicting perspectives?

I am pretty countersuggestible, so although it did affect me when people suggested I was harming my children, I think I turned my anxiety into renewed resolve. It seemed so ridiculous (the criticisms, I mean). It increased my commitment to challenging these unexamined articles of faith about what technology can do for us.

What are your feelings about the recent release of the book in Korean? Do you think the Korean audience will respond differently compared to readers in North America and Australia?

I am thrilled that the book is being published in Korea. And yes, I do anticipate a different response - a more intense one on both pros and cons, reflecting the more intense engagement with media in your country. I would venture to guess there is both more defensiveness as well as more anxiety and fear.

In the book, you reflect on the moral and practical dilemmas posed by modern technologies, asking yourself “What are right ways to use them?” After going through this process with your family, what are your answers to that question? And are you still against computer use when your children do their homework?

I am a big believer in mono-tasking, especially when it comes to schoolwork. Ideally, the tasks of reading and writing should be segregated absolutely from any online involvement. Using the Internet to research and explore is essential, of course. It would be ridiculously counterproductive to suggest otherwise. So it is not an either/or proposition. It’s a how/in-what-sequence proposition.

Your experiment concluded on July 4, 2009, and your family turned their iPhones and laptops back on. Two years and nine months have passed since your re-engagement with the wired world. After the experiment, do you think you and your children can properly balance cyberlife and real life?

I think it’s an issue we all struggle with, each in our own way, every day of our lives - but at least we now know that it’s an issue. At least we know the struggle is worth the effort.

Smartphone-addicted toddlers have become a big social issue in Korea. Lots of young children are hooked on iPad games, and it’s common to see them playing with digital gadgets at restaurants and in public places. What are your tips for parents who enjoy the peace and quiet that comes while their kids are playing Angry Birds?

I actually wrote a little piece for The Huffington Post about this. I have a lot of sympathy for this practice, and I don’t believe it is necessarily a bad choice. Some iPad apps that are designed for kids can be absolutely brilliant and there is little doubt that the stimulation and the learning can be wonderful thing.?.?. in moderation! Screens are not the devil, after all, but abdicating our responsibility to use them appropriately and deliberately might be.

You wrote about motherhood in “The Mask of Motherhood” and how media affects our lives in “The Winter of Our Disconnect.” What are your future plans as a writer?

I am interested in lying - sincerely (LOL!) and am currently tossing around ideas for a new life-experiment that involves truth-telling.