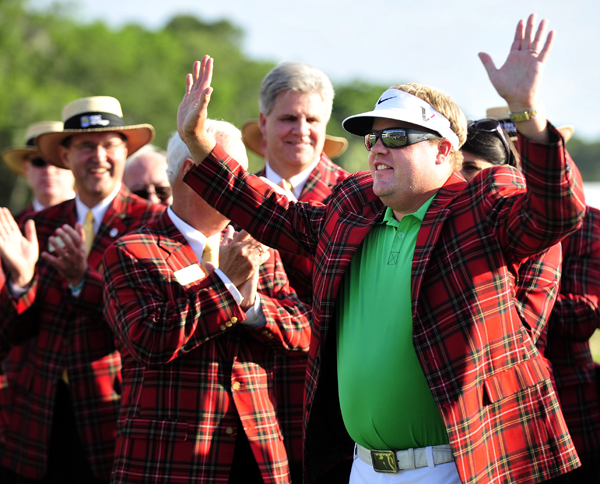 Carl Pettersson waves to the crowd after putting on the tartan jacket on the 18th fairway during the final round of the RBC Heritage golf tournament in Hilton Head Island, South Carolina, on Sunday. Pettersson finished at 14 under. [AP/YONHAP]


HILTON HEAD ISLAND, South Carolina - Carl Pettersson had another fast start and finished with a 2-under 69 for a five-shot victory over Zach Johnson on Sunday in the RBC Heritage.

Pettersson had a run of five straight birdies on the front nine during the third round Saturday to move in front. This time, Pettersson birdied three of the first five holes and built a five-shot lead by the turn that he never relinquished. He finished at 14 under.

It was Pettersson’s fifth career PGA Tour title and his first since the 2010 Canadian Open. He tied with countryman Jesper Parnevik for most wins on tour by a Swedish player.

“It was great,’’ Pettersson said. “I didn’t want to put too much pressure on myself, so I kind of downplayed the whole thing. But getting off to a birdie on one was great.’’

Top-ranked Luke Donald needed to finish eighth or better to retain his ranking, but tied for 37th and will fall behind Rory McIlroy.

Johnson shot a 70 to finish second at 9 under, while Colt Knost’s chances for his first PGA Tour title fell apart with a 74. He was third, another shot further back.

Kevin Stadler (68) and Billy Mayfair (69) tied for fourth at 6 under. Two-time Heritage winner Boo Weekley had his worst round of the week, 73, to tie for sixth with Matt Bettencourt (69).

Masters winner Bubba Watson and most of the world’s best took the week off to recover from the year’s first major.

Pettersson rolled in a 24-footer on No. 1 to get things started with a birdie. He added another birdie, from 16 feet on the par-3 fourth hole, then two-putted from 40 feet on the par-5 fifth to go up by four shots. When Johnson took bogey at No. 10, Pettersson was five strokes in front and cruising.

Knost was on top after Thursday and Friday and felt good as part of the final pairing. But those nerves Knost acknowledged on Saturday were apparently back again in the final round.

He missed an 8-foot putt for par and made bogey on No. 1 for a second straight round to drop three shots behind Pettersson. And just like on Saturday, Knost fought back with a birdie on the second hole - he made eagle there in the third round - to close in on Pettersson.

However, Knost’s chances ended a hole later with a horrible drive out of bounds left on No. 3 that led to a triple-bogey seven and left him five shots behind and out of contention.

Johnson, four strokes behind Pettersson at the start, tried to make a charge with birdies on the second, fourth and fifth holes. Johnson closed to three shots when he birdied No. 15, and Pettersson had his first bogey of the day moments later.

But Johnson ran out of steam on the 16th hole when he drove into a waste bunker and took bogey. Still, it was Johnson’s best showing of the year and his first top-10 finish since January.

Donald was largely resigned to surrendering No. 1 when he woke up early for his 9:46 a.m. start time, more than four hours before the final group with Pettersson and Knost teed off.

Donald’s round began badly with a double bogey at No. 1. He worked his way back with birdies on the fifth and sixth holes, and that’s where he stayed. AP