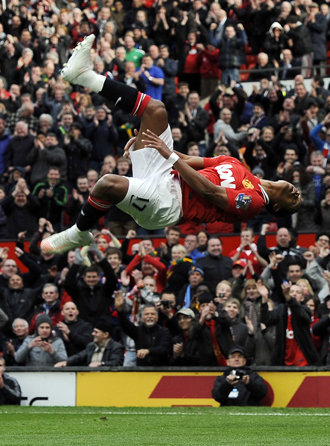 With United owners the Glazer family making a rare appearance at Old Trafford, Danny Welbeck and Nani were also on the mark as Sir Alex Ferguson’s team closed in on a 20th English league title.

Should United and second-placed neighbors City achieve the same results in their next fixtures on Sunday, then Ferguson would see his club make mathematically certain of that title with victory in the Manchester Derby at the Etihad Stadium on April 30.

“There could be twists and turns yet, but the name of the game is to enjoy ourselves, play with the expression we did in this game and hopefully we will be alright,” said Ferguson.

“You can never be too confident. My experience tells me there is always something that is going to bite you on the bum. Hopefully we can avoid that; the name of the game is not dropping any more points.

“It’s one game less. That is what I take out of the game. We’ve won our game with a good performance which is good at this time of the year.”

Before Young’s early intervention, United survived a scare inside the opening minute as Stephen Ireland’s through ball sent Andreas Weimann bearing down on goal only for the Austrian to shoot too close to United goalkeeper David de Gea, who saved comfortably.

But as United quickly gathered steam, there was a sense that Villa might be left to rue such a miss, and just six minutes into the game, that certainly appeared to be the case.

Young, who found himself at the centre of a similar controversy after a disputed penalty against QPR last week, clearly made contact with Clark.

But questions will be asked of the manner in which he fell to the ground and the haste with which referee Mark Halsey pointed to the spot.

Rooney had little interest in the debate, however, and confidently placed his penalty past the dive of Shay Given into the bottom right-hand corner for his 30th goal in 39 games for United this season.

Rooney appeared greedy to add to his tally and he appeared on the end of a Young corner, helped on by Michael Carrick, to head just wide after 24 minutes before Antonio Valencia created an opening for Welbeck which struck James Collins.

Villa had moments that concerned United - Clark headed just wide from a free kick and Ireland curled a shot just wide - but the remainder of the first half belonged to the home side.

Veteran Paul Scholes sent a spectacular 20-yard volley whistling just wide, connecting directly from a Young corner, and Valencia’s cross was met by Welbeck, whose point-blank shot was somehow kept out by Given.

United’s second goal arrived two minutes from halftime, via an attack mounted after good midfield play by Carrick and Rooney.

Carrick passed wide to Patrice Evra, whose left-wing cross was missed by both Collins and Nathan Baker in the middle, allowing Welbeck to slide in at the far post.

Valencia and Scholes saw shots blocked in quick succession just after the hour, following the introduction of Nani as a replacement for Young.

Villa was not aided by the loss of Clark after a clash of heads with Evra, although his replacement Emile Heskey came close to pulling back a goal with his header.

Rooney should have done better and killed off the game for good in the 67th minute when rolling a shot tamely wide from 15 yards, but the England forward eventually did claim United’s third six minutes later.

There remained only the issue of how far United could eat into City’s superior goal difference, and City could thank their former goalkeeper Given for acrobatic saves to keep out subsequent goal-bound shots from Welbeck and Valencia. AFP