Ahn’s decided to run for president

Ahn’s decided to run for president 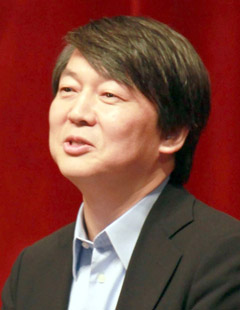 Ahn Cheol-soo has made up his mind to run in the December presidential election and begun recruiting allies for his campaign, the JoongAng Ilbo reported yesterday, quoting a key aide to the 50-year-old software mogul and scholar.

Ahn, the dean of the Seoul National University Graduate School of Convergence Science and Technology and the founder of antivirus software company Ahn Lab, met with a senior liberal politician before last week’s general election to persuade him to join his campaign, a key aide to Ahn told the JoongAng Ilbo Sunday.

Instead of joining the Democratic United Party, the largest opposition party, or creating a new party of his own, Ahn intends to form a loose political alliance and recruit supporters independently, the source said.

The source said the meeting with the senior liberal politician, who is of centrist, pragmatic leanings, took place in mid-March. He declined to name him.

“I have made up my mind,” Ahn was quoted as telling the politician. “I will lead a new political experiment. Please join me.”

The senior politician reacted with skepticism, the source said, asking Ahn if he really was determined to run, stressing that a presidential campaign is not easy. Ahn responded that he is a man of strong will, although he looks soft and gentle.

“Once I am determined, I don’t get shaken,” Ahn told him. “I have made many preparations, and I won’t take a step back from now on.”

The source also said Ahn told the politician that he was “ready to create a situation without riding free of charge on an existing political force.” Ahn also said he would not do anything to disappoint others even if his new political experiment fails.

According to the source, Ahn may has met other veteran politicians to recruit them. Ahn told them about his plan to launch a “forum” that will serve as his presidential campaign camp, and start a think tank to develop policies and a platform.

“Because Ahn Lab and the Ahn Cheol-soo Foundation have limits on their political activities, we need a new organization,” the source said. “The forum, which will be launched soon, will serve the role.”

According to the source, Ahn will also use social networking services and the Internet to aggressively solidify his support with the public, and take an official step to start a campaign after he completes his first semester lectures at Seoul National University in June.

But Ahn may go public with his presidential ambition earlier.

Sources said Ahn is thinking about participating in a meeting to be hosted by the Kwanhun Club, a group of senior journalists, where he would announce his run for president. The club has a history of inviting leaders of ruling and opposition parties and presidential contenders. Last month, Park Geun-hye, interim leader of the Saenuri Party and a likely presidential candidate, joined one of its sessions.

The club sent an invitation to Ahn last month.

The JoongAng Ilbo’s exclusive report about Ahn’s run, which was published yesterday, rocked the ruling Saenuri Party and the opposition Democratic United Party. Although it was widely speculated that Ahn would eventually join the race, the ruling and opposition parties are both paying close attention to Ahn to determine their strategies.

Ahn neither confirmed nor denied the JoongAng Ilbo report yesterday.

The report shocked the DUP in particular because it has continuously appealed for him to join the party and run in its presidential primary. Following the report, its pleas intensified.

“The people are very favorable to Ahn,” Representative Chung Sye-kyun, a senior advisor to the DUP, said in an interview with SBS radio. “It is desirable for him to join our party and compete against potential presidential candidates.”

Other senior DUP leaders also told Ahn to join the party. “It is better for a politician to stay in the mainstream,” Representative Park Jie-won told BBS radio yesterday. “He should join the DUP and build up his power by competing with DUP candidates,” Park said, adding that he had been approached by Ahn aides for a meeting.

Representative Lee Jong-kul said Ahn is the greatest alternative for the liberals, and the party should open up a path for him. The Saenuri Party tried to downplay the significance of Ahn’s preparations for a run after its leader and presidential frontrunner, Park Geun-hye, gained momentum after leading the party to victory in the general election.

“If Ahn will ally with the leftist political parties, we will see more clearly his identity,” Representative Lee Hahn-koo told PBC radio yesterday.

He said Ahn has spoken at universities, bostering his appeal to the young generation, but that won’t necessarily resolve problems that a president faces. “I am not sure if Ahn has the problem-solving ability for now,” he said.

It remains to be seen if Ahn will eventually join a DUP presidential primary or if he will run as some kind of independent. His aides are increasingly paying attention to the political history of Dwight Eisenhower, who served as the U.S. president from 1953 to 1961. “The people directly and indirectly linked to Ahn are doing intensive analyses of the Eisenhower model,” a political source said.

Eisenhower, who served as the Supreme Commander of the Allied Forces in Europe during World Wall II, was credited for leading the D-Day Normandy landings in 1944. After the war, he served as the president of Columbia University in 1948.

He moved into politics only after public desire for him to run for president was already established. While both the Democrats and the Republicans aggressively tried to recruit him, he chose the Republican Party and defeated Democrat Adlai Stevenson in a landslide. Eisenhower’s victory marked the first Republican presidency in 20 years. Ahn aides believe he is like Eisenhower in that he is not a career politician and his public support stretches over a wide spectrum.

In a March 27 lecture at Seoul National University, Ahn stressed the flexibility of his thinking. “If I participate in politics, I won’t rely on any particular ideology,” Ahn said. That was similar to Eisenhower, sources said, because the U.S. president emphasized harmony and compromise with the Democrat-dominated Congress.

Eisenhower was also known for using television wisely during his presidential campaign, while his Democrat rival failed to understand the medium. In 1950, only 9 percent of the households in the U.S. had TVs, but the rate skyrocketed to 34.2 percent in 1951.

Eisenhower’s “image politics” shows similarities to the Ahn camp’s plan to use the Internet and social network services aggressively instead of relying on the conventional methods of political parties.

According to the sources, they also hope Ahn has a benign reputation in light of the freeware antivirus program that his Ahn Lab distributed long before the emergence of his political ambitions. He also launched the Ahn Cheol-soo Foundation early this year to donate a half of his stakes in the software company to good causes. Ahn’s aides pointed out that Eisenhower was known for similar noblesse oblige.