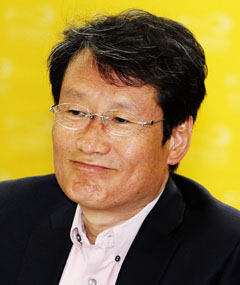 The main opposition party, which consists of loyalists to former President Roh Moo-hyun, and others had a fierce altercation Sunday night over who will fill the power vacuum of the former leader for two months until a leadership election slated for early June.

The party plans to hold an election on June 9 when an emergency committee is set up and new leadership members will be elected. After that point, the committee will manage the party’s potential presidential candidates until the December race.

Even though loyalists of late President Roh strongly support him, Moon lost in his general election race in Busan. Moon told reporters that he regrets his defeat in the general election, but he thinks “a power vacuum should not happen at this crucial moment” and he will “follow the party’s internal rules,” expressing his will to be the interim leader.

However, party members not loyal to Roh said the late president’s confidants are trying to consolidate their power. They also said that most of the loyalists lost in the election last week, and urged them to step down from the party’s inner circle.

In fact, a string of loyalists lost in the general election, including Roh’s close confidants Ahn Hee-jung and Lee Kwang-jae. Especially, the party was shocked by the defeat in Gangwon, the northeastern region of the country where many pro-Roh figures have long held high-ranking positions. The DUP didn’t win a single seat in the region last week.

An aide to Sohn Hak-kyu, senior advisor of the party, said, “People will think nothing has changed in the DUP” if Moon takes over for Han, because Han is also known as Roh’s man.

Park Jie-won, a Supreme Council member and not a Roh supporter, also told the JoongAng Ilbo, “People won’t accept it if those who should take responsibility for the loss of the election lead the party again, even if it’s only for two months. All of the current leadership members should resign immediately.”

In the end, the party members finally reached a decision to appoint Moon as interim leader. They will hold a vote on May 4 to elect a floor leader who will preside over the party until the leadership election in June.

“We reached an agreement that if we let Moon lead the party until the election, it would seem that he didn’t take full political responsibility [for the defeat].”

Under the party’s rules, Moon can appoint some high-ranking positions in the party, but speculation is high that he would be controlled by members that aren’t Roh loyalists.