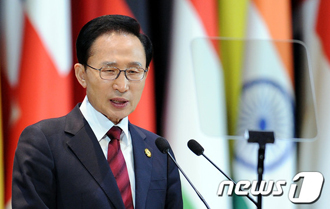 President Lee Myung-bak yesterday criticized the leadership of North Korea for having spent a fortune to test a long-range rocket while its citizens were suffering from starvation, advising Pyongyang to not be afraid of change.

Lee devoted most of his biweekly radio address to North Korea, particularly to its failed rocket launch of last Friday. The president’s blunt criticism came a day after the Kim Jong-un regime celebrated the 100th birthday of Kim Il Sung, the North’s founder and the current leader’s grandfather, with a massive military parade.

Although Pyongyang insisted that it was launching a satellite into space last Friday, Lee said, “The whole world knows that it was in fact a cover for developing long-range missiles capable of carrying nuclear warheads.”

“The leadership of North Korea might think they could help further consolidate their regime by threatening the world with nuclear weapons and missiles,” Lee said. “However, such acts will only put North Korea in greater danger.”

“The cost of the North’s launch this time is estimated to be a whopping $850 million,” Lee continued. “With the money spent for the launch of that missile, it is possible to purchase 2.5 million metric tons of corn, an amount that would make up for the North’s shortage of food for six years and completely address the food shortage.”

Stressing that the North’s action was “tantamount to taking food out of the mouths of hungry people,” Lee said, “The reason for the existence of any nation is to make sure its people live happily and comfortably.”

Reminding the North of the economic development in China, Vietnam and even Myanmar through reform, Lee said, “There is no reason for the North not to do likewise. If it would only decide to unlock its doors and redirect its course now, it would not take long for it to catch up with China and Vietnam.”

Lee said the leadership of the North must not be afraid of change. “There is no one whatsoever that is trying to threaten or change it with the use of force or coercion,” Lee said. “If the North changes on its own, the international community as well as South Korea will work together with it.”

After the missile lifted off and exploded Friday morning, Lee hosted a meeting with his foreign and security ministers to discuss the situation.