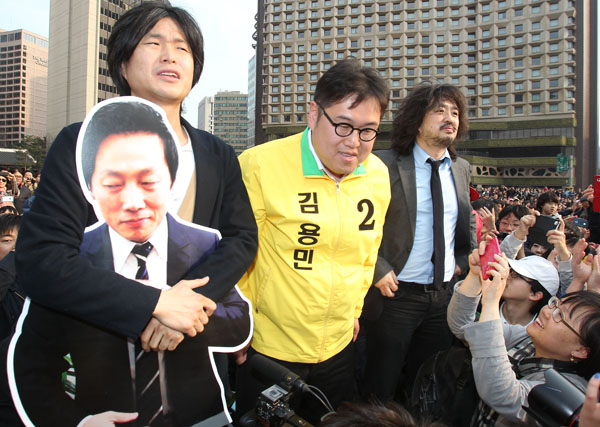 Kim Eo-jun, right, and Joo Jin-woo, left, hold a rally to support Kim Yong-min, center, a co-host of “Naneun Ggomsuda” (“I’m a Petty-Minded Creep”) who ran for Nowon A District in northern Seoul, at Seoul Plaza on April 8. By Kim Do-hoon

The two podcast hosts, Kim Eo-jun, 44, head of an activist Internet newspaper, and Joo Jin-woo, 39, a reporter, were charged with violating election laws including holding large-scale rallies in a public place on multiple counts between April 1 and 10, to show support for specific candidates, said the police.

Last Friday, the Seoul Metropolitan Election Commission submitted a bill of indictment to the prosecution on the grounds that media which has not been authorized by the election commission cannot participate in activities to support specific candidates.

But the Seoul Central Prosecutors’ Office determined that a preliminary investigation into the case was needed and passed the campaign violation case on to the police.

Kim Yong-min, who created a national uproar with raunchy jokes and foul language he used on the “Naneun Ggomsuda,” unsuccessfully ran for the DUP seat in Nowon A District. Chung also failed to win in the Gangnam B District. On April 8, the two were a part of the “Naneun Ggomsuda” concert to rally voters at Seoul Plaza in City Hall, central Seoul. In front of 6,000 citizens, Kim and Joo made comments like, “MB [President Lee Myung-bak] cowers behind Kim Yong-min,” and “Yong-min will never resign.”

The election commission said that Kim and Joo violated the Article 91, Clause 1 of the election law which forbids the use of megaphones on non-designated vehicles and Article 103 which prohibits gatherings with the objective of campaigning.

The election commission further submitted to prosecutors transcripts of speeches in which Kim Eo-jun and Joo Jin-woo show support for the DUP candidates and slander their opponents as evidence.

After the police finish their investigation into the allegations regarding the violation of election laws, it will pass the case on to prosecutors.