Another dismembered body found in Gyeonggi

Another dismembered body found in Gyeonggi 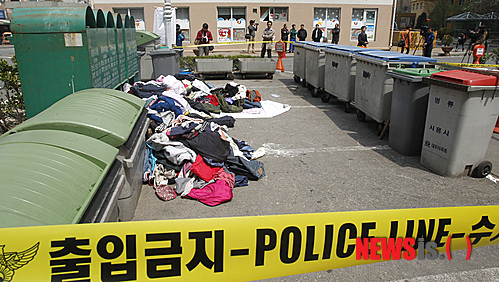 Just two weeks after a woman was killed and dismembered in Suwon, another dismembered body was found at an apartment complex in Siheung, Gyeonggi.

The Siheung Police Precinct in Gyeonggi said yesterday that the corpse of a 69-year-old woman surnamed Lee was found at 8:02 a.m. at the public trash area of the Daewoo Prugio apartment complex in Eunhaeng-dong.

The police said that the body was found by a 45-year-old garbage collector surnamed Shin, in the area where apartment residents pile their trash, before he transferred the garbage to a landfill in Maehwa-dong in Siheung.

Shin has testified to the police that pieces of a dismembered body, including a head, a pair of arms and legs and other pieces, were put in four separate black garbage bags - one 50-liter (13-gallon) and three 20-liter bags.

“I thought it was food garbage because it was giving off a foul stench,” Shin said during the questioning.

“We opened up the bags to check out the substances to separate them from normal trash because food garbage must be separated, but what we saw were pieces of a dismembered body.”

The victim lives in Mokgam-dong, Siheung, about 20 kilometers (12.4 miles) south of the apartment complex. The police said that they identified Lee through her finger prints. Police arrested her husband as a prime suspect yesterday afternoon.

On April, 1, a 28-year-old woman was kidnapped and killed by 42-year-old ethnic Korean man surnamed Woo in Ji-dong, Suwon, Gyeonggi.