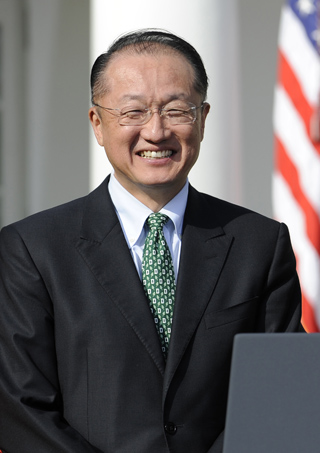 The bank’s directors selected Kim in a meeting over Nigerian Finance Minister Ngozi Okonjo-Iweala. Kim, who will take up the post in July for a five-year term, succeeds Robert Zoellick, former deputy secretary of state.

Born in Seoul in 1959, Kim moved to the U.S. with his family when he was 5 years old. He has served as the president of Dartmouth College since 2009 and is also known for his tireless efforts to combat the spread of HIV/AIDS and tuberculosis in the developing world.

Kim said his knowledge on Korea’s industrialization and democratization will be of great help in working at the World Bank.

The U.S. hailed Kim’s election, which kept alive the tradition of Americans leading the World Bank despite a challenge by some developing nations.

Kim’s selection marks the first time that the head of the lending body has been chosen through formal competition.

“I appreciate the strong support offered to Dr. Kim from leaders around the world,” Obama said in a statement. “I am also pleased that this has been an open and transparent process, and would like to take this opportunity to acknowledge the outstanding qualifications and commitment of the other two candidates.”