ne of the more severe yellow dust storms of the last decade struck Seoul in 2007. Seen here is the effect on the financial district of Yeouido in western Seoul. By Oh Jong-taek

In Korea, spring not only signals the advent of warm weather but also the arrival of an uninvited guest in the form of hwangsa, or yellow dust.

Rising from the deserts of Mongolia and northern China, the sporadic but intense dust storms scatter more than 80,000 tons of dust particles over the Korean Peninsula at their worst.

Besides causing respiratory problems, the airborne soil particles have a negative effect on a wide range of industries, from aviation to agriculture, shipbuilding to semiconductor manufacturing. Many companies have documented losses or put in place precautions to stave off the harmful effects of the heavy metal-laden particles.

As the desertification of China and Mongolia progresses and makes yellow dust more of a problem, some Korean companies have also launched environmental projects to stem the expansion of deserts and prevent the meteorological menace from further hijacking citizens’ activities and companies’ outdoor operations.

Yellow dust, or Asian dust, has been known to travel on high-speed eastward winds to affect air quality over Japan and even the western coast of the U.S. during severe occurrences.

But the positioning of the Korean Peninsula, so often directly in the path of the dust clouds, renders local citizens and businesses especially vulnerable to the multifaceted influence of the seasonal phenomenon.

In Korea, yellow dust usually occurs between March and May as dust clouds from southern Mongolian and southwestern China begin to kick up after warmer weather defrosts the frozen soil of winter.

The dust particles that arrive in Korea are very finely grained, as coarser dust cannot travel far and falls near the source of the dust clouds. With a single occurrence of yellow dust, between 46,000 and 86,000 tons of dust particles are spread over the peninsula.

Moreover, with continued industrial development China, yellow dust is laced with concentrations of heavy metals such as lead, cadmium and chromium at two to 15 times the level of normal air.

As such, the mixture of fine dust and noxious chemicals can trigger respiratory diseases such as bronchitis and asthma, as well as heavy metal poisoning. However, it can also cause failures in sensitive equipment and products and corrode machinery if not washed.

More worrisome is the fact that yellow dust has become so much more frequent. Seoul has been seeing an average of 6.3 cases per year in recent years, up from 0.9 in the 1970s, 1.8 in the 1980s and 2.4 in the 1990s, according to the National Institute of Meteorological Research (NIMR).

However, in 2010 the capital had to endure no fewer than 11 episodes, with dust clouds arriving even during the winter months of November and December.

“The fact that yellow dust is occurring much more frequently is due to the accelerated desertification at the source,” said Chun Young-shin, a researcher of the phenomenon at NIMR.

As for local industries, the costs are far from negligible.

According to the Korea Environment Institute, the societal cost of dust particles such as yellow dust is estimated to be between 6 trillion won ($5.3 billion) and 18 trillion won. This number factors in losses and additional costs caused by the pervasive yellow dust particles, which big business group Federation of Korean Industries noted in a 2006 report can potentially cause faults in sensitive products such as semiconductors and electronics, lessen foot traffic for outdoor businesses such as tourism and sports and cause delays in distribution. 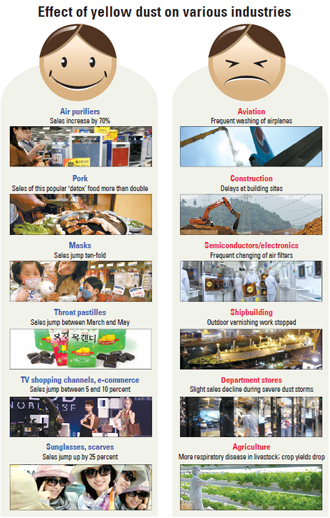 “According to a 2008 report by the National Institute of Meteorological Research, out of a total of 695 listed corporations, some 141 companies, or 20.3 percent, were found to be either directly or indirectly affected by yellow dust,” said Lee Joong-woo, vice president and professor of business administration at Inje University.

“The revenue of these affected companies alone reached 365.6 trillion won, or 46.8 percent of all listed companies’ revenues.”

However, agriculture, aviation and construction may be most affected.

Both farming and livestock were found to suffer. According to the state-run Rural Development Administration, the number of cucumbers decreases by roughly 10 percent during an occurrence of yellow dust, while the number of green pumpkins that fall before ripening rose by between 0.4 and 9.1 percent.

In the realm of aviation, flights are occasionally canceled due to low visibility caused by the dust storms. In 2002, 102 domestic flights fell victim to this, causing an estimated 5.8 million won in direct revenue losses from airlines, airport businesses and travel agencies, and an average loss of more than 5.67 million won for each canceled flight, according to the Ministry of Land, Transport and Maritime Affairs.

However, such interference to flight schedules is far and few between. Local airlines claim the biggest headache produced by yellow dust is the cost involved in frequently washing their aircraft.

According to Korean Air, it costs 3 million won to wash the outer shell of a B747 or B777 jumbo jet because it requires 16 people using 10 tons of water over four hours on average. 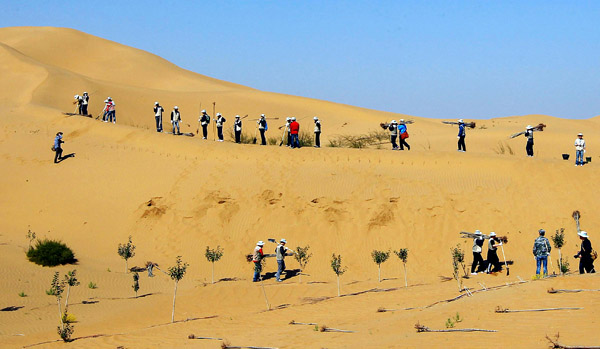 Employees of Korean Air move to plant desert willow trees at Kubuqi Desert in the north Ordor highlands, China, with students from Inner Mongolia University last September. As part of the company’s “Global Planting Project,” employees formed a forest of roughly one million trees over some 3.17 million square meters of land as of last year. [YONHAP]

The airline said that even though equipment inside planes is seldom, if ever, affected by yellow dust as the particles are too fine, the aircraft need to be washed regularly as the dust that sticks to their surfaces can make them slightly less responsive.

“The frequency of cleaning depends on the conditions; the schedule might be sped up from once a month to twice a month, or whenever necessary,” said spokesperson Park Hyun-jung.

Meanwhile, yellow dust occurrences can cause delays at outdoor building sites. This is why top players in the construction industry such as Ssangyong Engineering & Construction have for years forwarded yellow dust forecasts from the Korea Meteorological Administration to each worksite through intranet systems. But critics say more could be done in terms of preparation.

“On most sites, the day’s workers do not receive protective gear for yellow dust [and] it would be difficult to use such gear even if it was provided,” said an official from the Korea Construction Workers Union.

“Ultimately, halting or postponing outdoor operations would be needed to truly protect workers’ health, but subcontractors end up putting time and money first unless it’s a severe emergency.”

As for other industries often cited as sustaining losses from yellow dust storms such as electronics and shipbuilding, natural conditions or precautions already in place were found to have prevented any significant impact.

Companies such as Samsung Electronics and SK Hynix, world leaders in semiconductor manufacturing, already had complex ventilation systems to eliminate any impurities from entering manufacturing lines.

“When yellow dust occurs, Samsung Electronics controls the pressure of the semiconductor manufacturing line to minimize the entry of outside contaminants,” said a Samsung Electronics official. “We also double the length of air showers for employees entering [the site].”

“Because our shipyard is in Geoje Island [on the southern coast of the Korean Peninsula], we aren’t as affected by yellow dust as the metropolitan area is,” said Kim Hyung-sik, spokesperson for Daewoo Shipbuilding & Marine Engineering. “Even though the dust can affect our outdoor coating operations, these are seldom done. We have separate shops for coating ship surfaces, so disruptions are very rare.”

However, some local businesses have utilized yellow dust as a chance to boost revenue. TV home shopping channels and online shopping Web sites are prime examples.

Usually, yellow dust, downpours and other bad weather increases sales by between 5 percent to 10 percent for these retail channels, as people avoid going out.

Retailers such as GS Shop, a TV home shopping channel operator as well as an e-commerce company, have gone further by adding related products such as air purifiers or steam vacuums to their weather broadcasts whenever the dust is set to make an appearance. GS Shop claims sales have surged as a result of the strategy.

Because convenience stores’ revenues also change drastically according to the weather, 7-Eleven has been purchasing weather information from a private company since 1997 to provide region-specific forecasts on franchisees’ order screens.

“Convenience stores have comparatively small stores and storage spaces, so changing weather forecasts for the next two or three days means a significant change in inventory and store displays,” said an official of 7-Eleven.

Masks, mouthwash and throat candy are some of the products such stores would race to display prominently, as their revenues during yellow dust occurrences jump by up to 10 times the level when air quality is normal, according to the 2006 report by FKI.

As consumers try to keep yellow dust from harming their health, foods widely believed to be good for “detoxing,” such as pork belly, also see a jump in sales when the dust arrives.

“Pork sales increase from March to roughly July or August, and it appears that both increased outdoor activity and the perceived healthy qualities of pork contribute to the increase,” said Kim Hyung-joo, a meat buyer for Lotte Mart. “Consumers believe the collagen and amino acids contained in pork are good for their health, and retailers emphasize such factors.”

Because the increased frequency and severity of yellow dust in recent years is caused by the desertification of Mongolia and northern China, some Korean companies address the problem by engaging in environmental conservation projects to foster vegetation.

For example, new employees of Korean Air are set to embark on their ninth year of planting trees this May after planting some 10,000 trees in Baganor Desert in Mongolia last year. They aim to create a forest of 56,000 trees spanning more than 274,000 square meters in areas such as the Kubuqi Desert.

Hanwha has also supported the United Nations Convention to Combat Desertification by planting some 50,000 trees in Selenge Province, Mongolia, by the end of last year. It also invited customers to participate by releasing a related “tree-growing” smartphone app. When completed, the group plants a real tree in the region in the customer’s name.