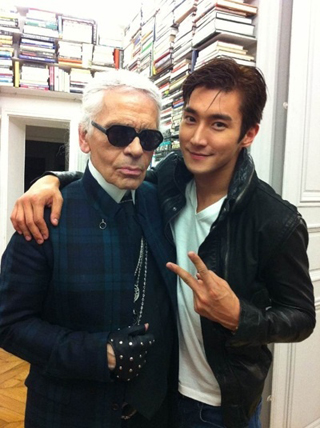 Super Junior’s Siwon has proved just how far reaching his popularity is by posting a picture of himself with Karl Lagerfeld, Chanel’s creative director, on Twitter.
The picture entitled “With Karl Lagerfeld in Paris,” uploaded on April 16 shows Siwon posing with his arms around the highly-regarded authority in the fashion world.

Apparently the photo was taken after the boy band member wrapped up posing for a pictorial to feature in a U.S. fashion magazine.

Meanwhile, fans were shocked at the connection between the two and questioned how they knew each other.
Singer BoA commented, “Who does he not know? I must admit, Siwon is a little impressive.”

Previously on April 7, Siwon received a happy birthday message from novelist Paulo Coelho, much to the amazement of fans.
By Carla Sunwoo [carlasunwoo@joongang.co.kr]