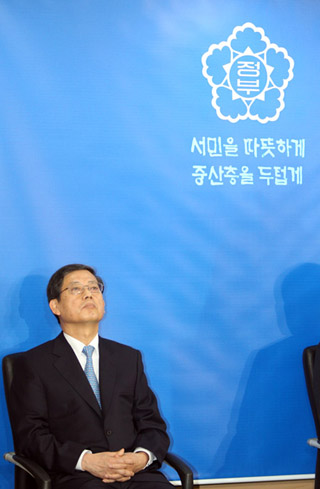 Prime Minister Kim Hwang-sik sits at the government complex in Jongno, downtown Seoul, yesterday, shortly before announcing the Cabinet’s decision to take strong measures to eradicate illegal private lending, which has been placing a strain on lower-income earners due to the high repayment rates. [YONHAP]

In a meeting with President Lee Myung-bak and various government ministers yesterday, the government announced its intention to “root out” illegal private lending through a crackdown spearheaded by the Prime Minister’s Office.

According to the plan, multiple investigative teams will be set up at prosecutors’ offices nationwide, while some 1,600 police officers will form teams in 16 regional police agencies to carry out busts.

Call centers for reporting illegal lending will be set up at the Financial Supervisory Service and the National Police Agency by May, with the FSS carrying out inspections of dubious private lenders while the National Tax Agency will track private lenders for signs of tax evasion. 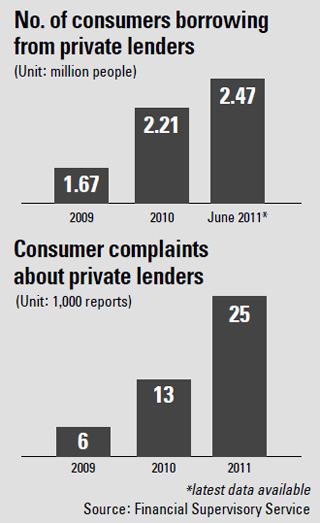 All profits above the current legal cap on private lenders’ lending rates - 39 percent for registered and 30 percent for unregistered lenders - will be used to support victims of illegal practices, while lenders engaging in illegal debt collection activities will be subject to on-site reviews and barred from commissioning debt collection to other agencies for three years.

As more low-income households turn to private lenders and pay through the nose, the Lee Myung-bak administration wants to crack down.

According to FSS data, the number of consumers borrowing from private lenders jumped from roughly 1.31 million in Sept. 2008 to 2.47 million last June. The number of complaints concerning illegal lending practices also rose from 6,114 cases in 2009 to 25,535 cases last year.