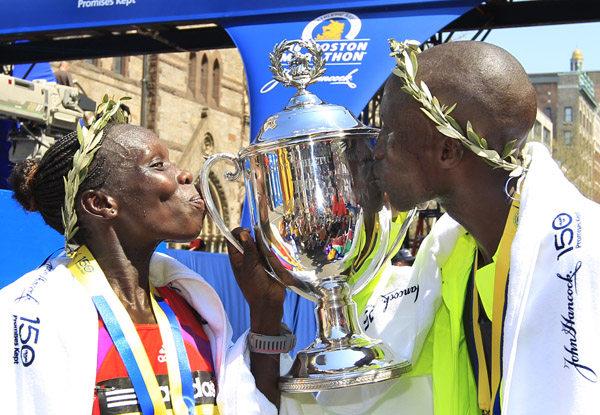 BOSTON - Kenyan runners swept both Boston Marathon podiums on Monday as Wesley Korir won the men’s race and Sharon Cherop triumphed in the women’s edition in steamy temperatures that slowed the defending champions.

Korir, 29, a graduate of the University of Louisville in Kentucky, finished in two hours, 12 minutes and 40 seconds, the slowest Boston winning time since 2007 and almost 10 minutes slower than the world’s fastest time set last year by countryman Geoffrey Mutai.

Levy Matebo came in second and Bernard Kipyego was third while Mutai, the world’s top-ranked marathon runner, dropped out of Monday’s race at the 30-kilometer (18.6-mile) mark due to cramps.

Korir, in sixth place after 20 miles, told reporters he had run a cautious race early on because of the weather but then set about gradually reeling in Matebo and the rest of the field.

“When the guys took off I tried to go with them, but they were taking off at a really hard pace. I knew that if I were to go too hard too soon too quickly, I’m going to cramp up,” said Korir.

“I was more concerned about myself because it’s really, really hot out there. At that point I was like, it’s going to be better for me to be conservative and to be safe.”

The Kenyan, a permanent U.S. resident who hopes to gain citizenship within a few years, said he spent much of the race “praying and singing,” thinking about his wife and daughter and fighting the occasional urge to “throw in the towel.”

Kenya also notched a sweep in the women’s race.

Behind Cherop’s winning time of two hours, 31 minutes and 50 seconds were Jemima Jelagat Sumgong, dropped in a furious last-minute dash by the winner, and Georgina Rono.

“We started slowly, we did not start fast like last year,” Cherop, who finished third in 2011, told reporters.

“I was really prepared this time around .?.?. it’s not my first time running in the heat and humidity.”

Defending champion Caroline Kilel dropped off the lead pack in the second half of the race and was seen taking a walking break a few miles from the finish.

Shortly before slowing, the slender Kenyan took a slight body check at a water stop.

Temperatures were above 80 degrees Fahrenheit (26.6 degrees Celsius) even as the speediest elite runners made their way toward the end of the 26.2-mile course.

Race organizers had urged many nonelite runners to not start the race due to potentially dangerous and certainly suboptimal conditions, and several thousand took up an offer to defer their entries to 2013.