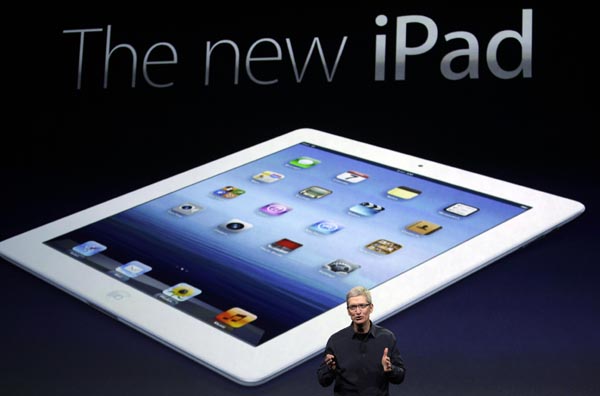 Apple’s new iPad will arrive in Korea on Friday through two mobile carriers, KT and SK Telecom. There will be no presales for the model, unlike for previous versions. In this file photo, Apple CEO Tim Cook introduces the new iPad during an event in San Francisco on March 7. AP


Apple’s new iPad will finally go on sale in Korea on Friday through two mobile carriers, SK Telecom and KT, slightly over a month after its release in the United States and a dozen other countries.

As was widely expected, the third generation of the tablet PC to be released here will only support 3G connections, not the much-faster long term evolution connection, because the frequency band for LTE is different in Korea and the U.S. The new iPad comes with the U.S. frequency.

The iPad comes in two models: one that only supports Wi-Fi connections and a more expensive model that uses both Wi-Fi and 4G LTE. SK Telecom won’t sell the former while KT will sell both. Both will have different prices depending on storage sizes.

Here in Korea, the super-fast 4G LTE model will use a type of 3G connection called HSPA+, both carriers said, a kind of upgraded 3G connection widely called 3.5G. Those connections are available for over 80 percent of the Korean market. Android smartphones sold since the middle of last year use those connections. The new iPad will be the first Apple product to run on them.

There will be no presales for the iPad, unlike for previous models. “Having obtained a sufficient volume to sell, we have decided not to accept reservations,” said a KT spokesman.

According to Apple Korea, aspiring owners can line up at four stores in Seoul - the Myeongdong branch of Frisbee, A#shop 2 in Coex, Concierge in front of Konkuk University and Willys in Jamsil - beginning at 7 a.m. Friday.

KT and SK Telecom will launch the sale at 8 a.m. on their Web sites, and brick-and-mortar stores open at 10 a.m. Web site orders may take several days for delivery.

Apart from Korea, 11 other countries - Brunei, Croatia, Cyprus, the Dominican Republic, El Salvador, Guatemala, Malaysia, Panama, St. Maarten, Uruguay and Venezuela - will get the new iPad Friday. In Asia, Japan and Hong Kong released it on the same day as in the U.S. China sales haven’t been announced yet. By the end of the month, the new iPad will be in more than 50 countries.