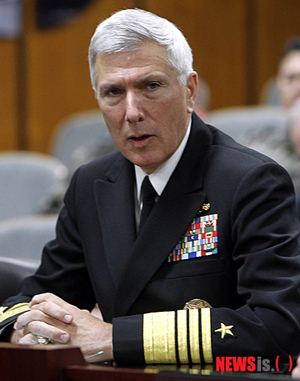 A senior U.S. military officer said yesterday all options are on the table to counter North Korea’s armed provocations, including a surgical strike on its nuclear facility.

Admiral Samuel J. Locklear, the commander of the U.S. Pacific Command, visited Korea for the first time since he assumed the post in March. During the visit, Admiral Locklear met with the National Defense Ministry press corps and spoke about a wide range of issues including North Korea’s latest rocket launch and the possibility of a nuclear test, as well as the U.S.-South Korea military alliance.

Following the North’s failed launch of a long-range rocket, which exploded only minutes after liftoff Friday, speculation has risen that Pyongyang will conduct a third nuclear weapon test. The North conducted its first nuclear test in October 2006, three months after a long-range missile test. In April 2009, the North also launched another long-range rocket and carried out the second nuclear test a month later.

Admiral Locklear said the United States is paying close attention to the possibility of the North’s nuclear test. Asked if a surgical strike on the nuclear test facilities is being discussed in the United States, commander said, “We are considering all options,” but he added it would be inappropriate for him to comment specifically on future military operations.

“It’s true that in the past the North Korean government has followed this type of missile launch with further provocations,” he said.

Admiral Locklear said the U.S. will work closely with its allies in the region to monitor the situation in the North.

He also refrained from assessing the North’s true missile capability, particularly after, what appeared to be, a new inter-continental ballistic missile was displayed at a military parade in Pyongyang on Sunday. He declined to comment on whether it was real or a dummy, but added, “I can assure you that the U.S. and our allies are monitoring very closely future developments of these types of missiles. We will be assessing the capabilities as we move forward.”

Calling the midair explosion of the long-range rocket on Friday “a fairly catastrophic failure,” Locklear said, “It certainly caused me to question their competency and advanced missile technology.”

Dealing with the new regime of Kim Jong-un is the first challenge in the region, he said. Should the North Korean leadership choose to abide by international obligations and cease provocations, this would be the preferred path, he said. But if further provocations is the path it chooses, the challenge for Washington and Seoul will be demonstrating the strength of their alliance through strong, mutual monitoring of the North.

Meanwhile, the National Defense Ministry yesterday announced that it will end the operation to retrieve debris from the North’s rocket. The operation began immediately after the rocket exploded and fell into the Yellow Sea, but no progress was officially reported until yesterday.

The Ministry said, “No progress was made in that operation.”