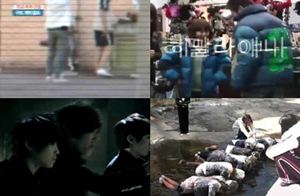 Police said a middle school boy, thought to have been bullied by his classmates, jumped to his death from a 20-story apartment building.

Yeongju Police Precinct in North Gyeongsang said that the 14-year-old middle school boy surnamed Lee jumped from the apartment in Hyucheon-dong, Yeongju City around 9:30 a.m. on Monday. The body was found by a 70-year-old security guard surnamed Jeong. The police presumed that the boy jumped through the window in the hallway of the 20-floor apartment building.

Before he committed suicide, he sent a text message to his classmate surnamed Kim at 8:12 a.m., saying he will be late for school. Lee’s teacher began to call him as soon as she was informed about the text message, but his cell phone was turned off.

The police said they found his backpack and a suicide note that described how he was bullied by his classmates.

The police said that full names of Lee’s two classmates were written on the suicide note. “Jeon [surname] keeps kissing my face like he’s gay and even licks my face with his tongue,” the suicide note read. “It feels terrible and disgusts me. They have forced me to join their group [a student gang]. I joined the group but they still treat me like a slave. I have to answer their calls at all times even during weekends. I hate this. I can’t live like this. I don’t want to live like a slave.”

The police say that Lee was trying to get out of the group, but failed because the two classmates threatened that they would bully him even more if he tried to quit the gang.

“We’re trying to check whether the boy was physically assaulted by the classmates,” a spokesman of the police told the JoongAng Ilbo.

The school, however, is under criticism for neglecting a student suffering from bullying because the boy was already categorized as a high suicide risk after a psychological test conducted by the school in May last year.

The police said that the boy was treated three times at a hospital and also received horticultural therapy - a therapeutic treatment engaging in gardening activities guided by a trained therapist - eight times but the school did not provide any specifics.

“We were not able to discover the bullying because he never mentioned it when he spoke with teachers,” a spokesman of the school said. “He was scheduled to have another consultation with teachers this month to check if he has any problems at school.”

The police formed a special investigation team with 23 police officers to probe into the boy’s suicide and will interrogate 10 students who are suspected of bullying the boy, teachers and his parents to find out the exact motive of the suicide.