Medical tourism on the rise

Medical tourism on the rise 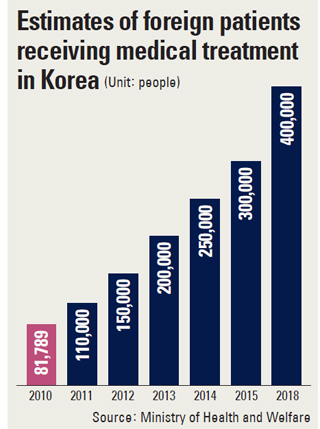 A 17-year-old patient named Mohammed from Abu Dhabi was busy yesterday preparing himself to be discharged from Seoul National Hospital in Jongno District, central Seoul.

Coming all the way from the capital of the oil-rich United Arab Emirates with his 46-year-old father Ismail, Mohammed received an operation last Thursday at the Seoul hospital to remove a 7-centimeter-long (2.7-inch) tumor inside his nose. His upper lip was slightly swollen from the operation, but he looked healthy.

“I feel good now that it’s become easier to breathe,” he said.

An increasing number of overseas patients like Mohammed are choosing Korea as a destination to receive medical treatments at local hospitals.

In particular, oil money is flowing into Korea following an agreement signed by the Ministry of Health and Welfare and the Health Authority-Abu Dhabi in November, last year.

Abu Dhabi’s health authority officially sends 3,000 citizens abroad every year for overseas medical treatments in Germany, the United Kingdom, the United States and Korea. The government pays for all fees.

According to industry sources, Abu Dhabi and Dubai patients spend 300 million won ($263,019) per person for a liver transplant and 200 million won for a kidney transplant.

Over the past five months, five patients from Abu Dhabi received surgeries in Korea, including a liver transplant.

Three patients with arthritis and crooked spines have operations scheduled for this month.

As of 2010, a total of 949 patients from the Middle East came to Korea to receive treatments. The number is behind other foreign patients such as those from the U.S. and Japan, but it is expected to increase in upcoming years.

As for Mohammed, it was three months ago that he was diagnosed with nasopharyngeal fibroma, a rare disease that causes a vascular tumor to grow inside the nose.

He visited a Canadian doctor in Abu Dhabi but was repeatedly told that “surgery would be difficult.” In the end, his last resort was to come to Korea as recommended by the Health Authority-Abu Dhabi.

“We inserted an endoscope inside Mohammed’s nose and cut 5 centimeters in between the lips and nose and took out the tumor,” said Won Tae-bin, ENT (ear, nose and throat) professor at Seoul National University.

It took six hours to remove the tumor, and in the end, the surgery was successful.

Fatima Al Ali, a 34-year-old who recently received a kidney transplant, was also quoted by Abu Dhabi media after returning home that he had regained hope in life.

“I’m so glad I had the transplant, and my health is improving,” she said.

As part of efforts to continue the momentum of boosting medical tourism, the Ministry of Health and Welfare kicked off its third Medical Korea event yesterday. The three-day event at COEX in Samseong-dong, southern Seoul, invites 12 minister-level officials from Abu Dhabi, Saudi Arabia, Qatar and Iraq.

Around 700 participants from 36 countries are expected to visit. Countries will discuss issues involving health and medical care services, medical resources and possible cooperation among participating countries for improvement.

Overall, the health ministry aims to attract 300,000 foreign patients to Korea by 2015, which will create around 811 billion won in revenue from medical and tourism spending.