Anxiety builds as the London Games close in

Anxiety builds as the London Games close in 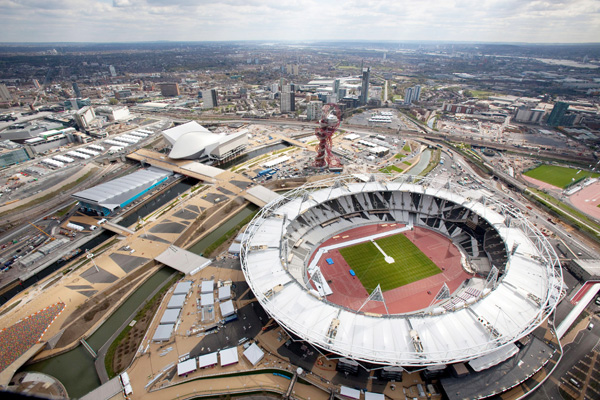 An aerial view of London’s Olympic Park showing the Olympic Stadium and the Aquatics Center (top left). There are only 99 days left until the start of the 2012 Olympic Games. [AP/YONHAP]


With the countdown to the London Olympics now in the double digits, anxiety is mounting in Korea as athletes hope to achieve a top-10 overall finish for the third consecutive time.

The 30th Summer Games kick off on July 27 and wrap up on Aug. 12. Korea has set the bar high with the seventh-highest medal count in the world at the 2008 Beijing Olympics, with 13 gold, 10 silver and eight bronze.

For Korea, the quadrennial event in London is a special moment, historically. The English capital hosted the Olympics 64 years ago and Korea, liberated from Japanese colonial rule in 1945, competed under the official flag of South Korea for the first time.

Korea finished in 32nd place among 59 countries in the 1948 Olympics. It took almost 21 days for the Korean athletes to arrive in London. But while travel time has changed drastically, one aspect remains the same: The athletes are competing for the glory of the country.

President Lee Myung-bak visited the Taeneung National Training Center in Seoul yesterday where he delivered a message of encouragement. Lee promised that the government is ready to fully support the athletes and urged them to only focus on their training.

“This year’s Olympics are very special to the history of Korean athletics,” President Lee said. “We expect that our athletes’ efforts and sweat will lead to good results in the Olympics and show the global status of our nation through sport.”

The Korea Sports Promotion Foundation (KSPO), a public foundation that manages projects related to national sports, announced on Monday that it has increased the monthly welfare pension for Olympic medalists, especially for those who win silver and bronze medals.

The gold medal, which has a value of 90 points and receives 1 million won per month, will remain the same.

The KSPO hopes the change in the Olympic medalist pension system will decrease the pressure on athletes’ medal finishes. It also expects to diminish the “No. 1 supremacy” attitude in Korean sporting culture.

“Korea is the only country in which athletes apologize after getting silver medals,” President Lee said. “Just participating at the Olympics is such a big honor. If the result comes from your best efforts, you should be proud.”

For this Olympics, the KSPO is also injecting a special 6.9 billion won to support Korean Olympians. The organization is donating 1.2 billion won to run Korea’s first-ever on-site training camp in London.

The Korea Olympic Committee signed a lease last year with Brunel University in West London to set up a training camp similar to the Taeneung National Training Center. Since most sports and supporting facilities will be there, the athletes will be able to train freely within their schedule. Previously, Korean athletes had to follow the schedule of the organizing committee.