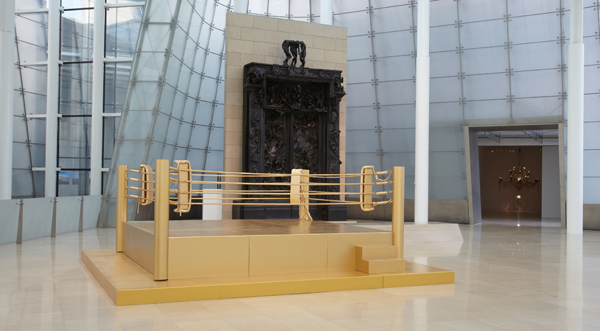 Bae Young-whan’s latest installation, “Golden Ring - A Beautiful Hell,” is shown against the famous bronze sculpture “Gates of Hell” by Auguste Rodin, which is on permanent exhibition at the Plateau gallery in central Seoul.

Two of Korea’s best-known artists in their 40s are having what curators call “halfway point retrospectives.” One is Lee Jae-hyo, whose solo exhibition continues through May 27 at the Sungkok Art Museum on Sinmunno in central Seoul. The other is Bae Young-whan, who is holding his solo show “Song for Nobody” at Plateau Gallery near City Hall Station in central Seoul until May 20.

Those who saw the 2010 film “The Housemaid” directed by Im Sang-soo will never forget the chandelier in the luxurious mansion where the remake of the 1960 film with the same title is set. The large chandelier decorated with glittering green glass plays a role in the dramatic and tragic end of the movie’s heroine, housemaid Eun-yi (Jeon Do-yeon). In addition, in the bird’s-eye shots used in the film from time to time, the chandelier acts an observer that looks down on the bourgeois family for which Eun-yi works. 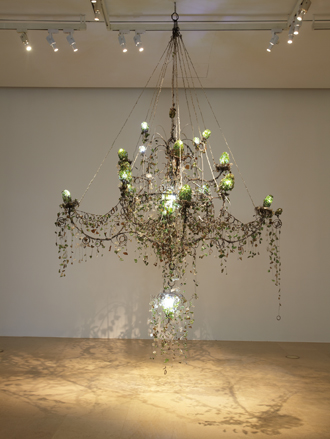 Bae’s “Song of Dionysus,” made of shards from broken wine bottles, is also part of his solo show at Plateau that runs through May 20. Provided by the gallery

That chandelier in all its detail is actually a copy of the 2008 work “Song of Dionysus” created by Bae Young-whan, which is now displayed at Plateau gallery in central Seoul as part of the 43-year-old artist’s solo show titled “Song for Nobody” that runs until May 20.

The decision to include the chandelier in “The Housemaid” was quite a deliberate one. At first glance, the light fixture looks like an elegant Art Nouveau craft, but a closer look reveals that its green glass pieces are actually sharp shards from broken wine and soju bottles.

In the same sense, the high-class family members in the movie look elegant at a glance but are actually selfish and cruel enough to break their housemaid’s heart.

“Song of Dionysus,” which Bae calls a “luxurious and miserable” work, is part of the artist’s “Insomnia” series. It represents the night of Seoul, Bae explained, which is dazzling with neon signs that hide its shabby back streets and people’s exhausting struggle to survive on them.

“To me, the night of Seoul can be summarized as ‘Let’s drink,’?” Bae explained when asked why he used alcohol bottles in his work. “Then, why do we drink? We do so to release what we are forced to suppress during the daytime through drinking at night. The night is the time of emotion.

“The world we live in is not made of only reason and cannot be explained with only reason. There are the parts that we come to know only through emotional communion.”

Accordingly, the wine and soju bottle shards in “Song of Dionysus” represent both the cruel aspects of life in a metropolitan city and also the things that help residents release their suppressed emotions.

Overall, the solo show is as good as Bae’s mid-career retrospective, as it features 26 works ranging from his early-stage “Pop Song” series to his latest installation pieces, including “Golden Ring ? A Beautiful Hell.” The “Pop Song” series consists of white canvases on which the lyrics or scores of well-known Korean pop songs are formed with white pills and glue. These materials are frequently associated with neglected citizens who scratch out a living on the back streets, hidden from view.

“They seem to be parodies of monochrome abstract paintings which were the mainstream of Korean modern art,” said Ahn So-yeon, chief curator of Plateau.

Korea’s 20th-century art is roughly divided into two categories. One is mainstream art influenced by modern Western works, with abstract paintings being the most important. The other is the so-called “people’s art.” Many of the works in this category are realistic paintings with strong political messages criticizing the military regime that was in power from the 1960s to the 1980s. 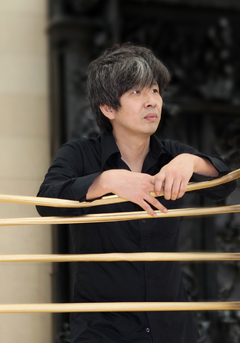 Bae stands on the border between these two categories. Though he apparently twists monochrome paintings popular among mainstream artists, he does not strictly adhere to the themes of people’s art, either.

For “Pop Song,” he chose ordinary songs for his works rather than the so-called “people’s songs,” which have strong political messages.

Bae’s way of visualization in his works is also varied, making it difficult to place him in one particular category. His “Pop Song” and “Insomnia” series as well as his “The Way of Man” series, which consists of a group of guitars made from abandoned wooden cabinets inlaid with mothers-of-pearl, require elaborate handicraft and make a strong visual impression.

On the other hand, his latest two installation works - “Golden Ring” and “Anxiety ? Seoul 5:30 p.m.” - which start and end his solo show, respectively, are more conceptual.

“I don’t deliberate on whether I should go more conceptual or do the opposite,” he said. “In each case, I find and choose the proper vehicle for the themes that come to mind.”

It is those themes, rather than the style of his works, that are more consistent. Bae often focuses on what he sees as society’s repressive and distressing realities.

Bae’s “The Way of Man” series symbolizes Korean men’s sad nostalgia about freedom of expression in their emotions and their pursuit of romance, both of which they gradually give up to become the patriarchal men that Korean society demands.

But Bae insists that even this one point of consistency is not intentional.

“I do not intend to make social works. I just wish that, when I have made a work, the result is social,” he said.

Major solo exhibitions: “Autonumina” at PKM Gallery in 2010, Library Project Tomorrow at Artsonje Center in 2009 and others.