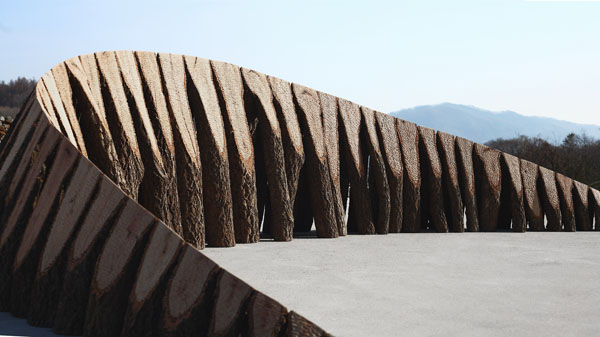 
Two of Korea’s best-known artists in their 40s are having what curators call “halfway point retrospectives.” One is Lee Jae-hyo, whose solo exhibition continues through May 27 at the Sungkok Art Museum on Sinmunno in central Seoul. The other is Bae Young-whan, who is holding his solo show “Song for Nobody” at Plateau Gallery near City Hall Station in central Seoul until May 20.

Nature has come indoors at the Sungkok Art Museum in central Seoul.

In a room at the museum, small stones hang from the ceiling by wire, floating as if they were meant to form a bizarre tunnel in the air. On the wall of another room hangs what appears to be a mysterious circular organism covered with dry black hairs or spines; it is actually a sculpture made of burnt tree branches. And sculptures in various geometrical forms made of chopped wood chunks are placed here and there, filling the space between the other pieces.

Many visitors will be more familiar with the wood sculptures than anything else on display. They show off their natural patterns, and are in the signature style of artist Lee Jae-hyo. 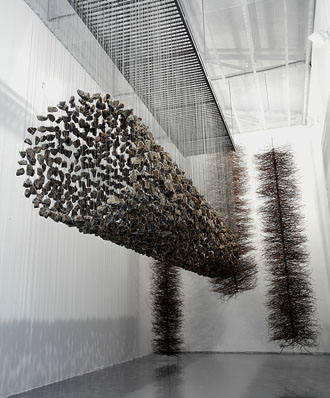 This installation work of stones hanging from the ceiling titled “0121-1110=1080815” (2008) is part of artist Lee Jae-hyo’s solo show “Working with Nature” at the Sungkok Art Museum in central Seoul. Provided by the museum

But in fact, all of the pieces inspired by nature are part of Lee’s solo show, appropriately titled “Working with Nature.” In total, the show, which is a mid-career retrospective for the 47-year-old, features his 300 works ranging from small sculptures made of scrap iron from Lee’s early days to his latest, large-scale installation works.

“Both the variety and unity of styles inherent in nature have constantly been inspirations for Lee,” said T.N. Park, chief curator of the Sungkok Art Museum, in a press preview late last month. “And he shows infinite affection for withered natural things such as tree trunks that remain after logging or fallen leaves and objects that have fallen into disuse.”

Lee told the reporters that he has obtained much of the wood for his sculptures from abandoned tree pieces taken from lumberyards. Using stainless steel nails and bolts to hold the pieces together, he makes sculptures in simple geometrical forms.

“I want to deliver nature’s energy and expressions with materials in my daily surroundings,” the artist said. “And I prefer round and globular shapes, as the globular shape is a primal form from which all the details have been cut.”

Some viewers might recall several of Lee’s best-known works from the lobbies of famous hotels, including the W Hotel Seoul and the Grand Hyatt Berlin. Indeed, some of Lee’s pieces do look like furniture and function as such. A piece on display at Sungkok, for instance, ambiguously resembles a table.

These works have been shown not just at art fairs or sculpture exhibitions but also at design fairs and festivals. At Design Days Dubai in the United Arab Emirates last month, one of Lee’s chairs was sold by a prince of Dubai. 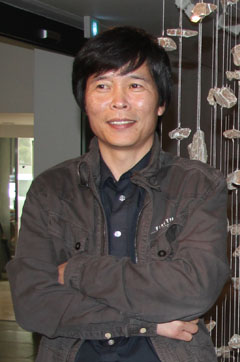 Asked whether he considers himself a fine artist or a designer, Lee said, “If I cut my globular wood sculpture in half, it turns into two tables. My flat works made of nails can also be used as tables.

“I don’t start my works with their utility in mind,” he explained. “Still, they can be used as furniture. And I don’t feel bad about that. If they come to have utility, more people will look at them. The border between fine art and design is collapsing.”

Critics, too, have noticed the blurring line.

“The fine arts and the so-called applied arts, having maintained a respectful, if in some cases also a rather disdainful distance for years - in the West, you could say for centuries - are slowly starting to come together again,” said Edward Lucie-Smith, a British art historian and critic, when commenting on Lee’s solo show at the Albemarle Gallery in London last year. “Lee Jae-hyo’s contribution to this development displays a quality not usually associated with artists from the Far East: a sly, sophisticated wit … Just as Ancient Greek sculpture idealizes the human body, Lee Jae-hyo, tongue in cheek, idealizes the image of the chaise longue.”