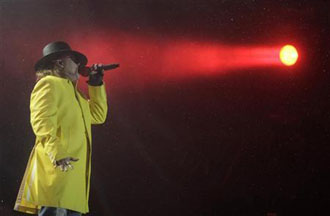 Guns N’ Roses frontman Axl Rose said on Tuesday he was “humbled, [and] blown away” by the support he had received from media and fans over his decision to decline his induction into the Rock and Roll Hall of Fame, and snub last weekend’s ceremony.

Rose said in a letter on the band’s official Web site that he was relieved at the unexpected “overwhelmingly positive response and public support” for his decision.

Some members of the 6,000-strong audience at Saturday’s ceremony in Cleveland booed when Rose’s name was mentioned as other members of the Guns N’Roses went up to accept their award.

The mercurial lead singer of the band explained on Tuesday that his refusal to accept his honor was rooted in confusion over the induction process, despite making efforts to inform himself. Rose was the first artist to publicly snub the honor since the surviving members of the Sex Pistols in 2006.

“I still don’t know or exactly understand what the Hall is or why it makes money, where the money goes, who chooses the voters and why anyone or this board decides who, out of all the artists in the world that have contributed to this genre, officially ‘rock’ enough to be in the Hall,” he wrote.

Rose had not clarified the motives behind his decision in an open letter released last week, other than to say he did not feel “wanted or respected.”

The Rock and Roll Hall of Fame Web site says the inductees are selected by the votes of more than 500 rock experts from a list of nominees drawn up annually by the Foundation’s committee on the basis of 25 years in the industry and “unquestionable musical excellence.”

Guns N’ Roses found fame in the 1980s with hits like “Appetite for Destruction” and “Paradise City,” but the original lineup broke up in the 1990s. Reuters