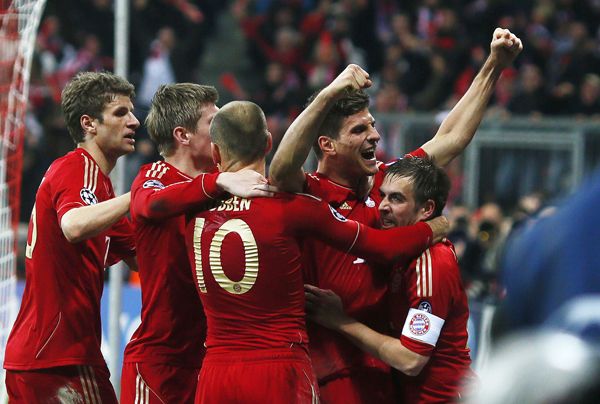 
MUNICH - Mario Gomez scored in the 90th minute Tuesday to hand Real Madrid its first loss in the Champions League this season and give Bayern Munich a 2-1 win in a pulsating first leg of the semifinal between two sides with a combined 13 titles.

Gomez’s 12th goal of this year’s competition boosted Bayern’s hopes of becoming the first team to play the Champions League final at its own stadium and earn its fifth title.

Real Madrid coach Jose Mourinho called Gomez’s goal a “lucky punch’’ and said a draw would have been a fairer result.

“But football is about goals and it doesn’t matter if they come in the first or last minute,’’ Mourinho said.

Franck Ribery opened the scoring in the 17th minute for Bayern Munich and Mesut Ozil equalized in the 53rd.

The second leg is next week in Madrid. Bayern has won 14 of its last 15 games in Munich, where Real has never won in 10 attempts. The Spaniards have only one win from 23 visits to Germany - a 3-2 victory at Bayer Leverkusen in September 2000.

“It was clear from the start that it would be an exciting, open game between two champion teams,’’ said Bayern coach Jupp Heynckes, who guided Real to the title in 1998.

“In my opinion, we deserved to win and we beat a great team. We played with hunger, passion and ambition.’’

Bayern now has 11 wins from 19 meetings between the great rivals - including nine from those 10 games in Munich.

Despite Real’s defeat, the away goal could be decisive for the nine-time champions.

“It’s not a bad result but it means we have to win at home and turn it around,’’ Mourinho said. “It’s not the biggest turnaround in history but we still have to do it. We can achieve this.”

Heynckes promised his team would continue to attack in Madrid.

“We are going to try to create chances and score one or two goals. We won’t be playing for a draw,’’ he said.

Bayern captain Philipp Lahm struck a similar note. “We have to do exactly the same in the second leg, work for 90 minutes, restrict their chances like we did today,’’ Lahm said. AP