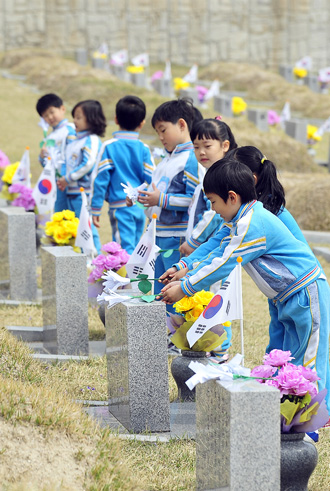 Children place flowers on tombstones at the April 19th National Cemetery in Gangbuk District, northern Seoul, to pay tribute to the 224 people, mostly students, who were killed during a civilian uprising in 1960. The April 19 Revolution in 1960 was a student uprising which protested against the increasingly autocratic rule of President Syngman Rhee and lead to the transition into the democratic but short-lived Second Republic (1960-1961). Today marks the 52nd anniversary of the event. [NEWSIS]