Kwak maintains he is innocent on bribe charges

Kwak maintains he is innocent on bribe charges 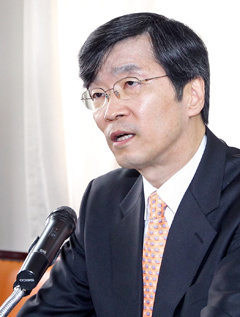 Kwak No-hyun, the superintendent of the Seoul Metropolitan Office of Education, spoke yesterday about his the jail sentence handed down Tuesday by the Seoul High Court. [YONHAP]

In response to the jail sentence handed down to him by the Seoul High Court, Seoul Education Chief Kwak No-hyun yesterday claimed he was innocent of charges that he bribed his former election rival, adding that he will continue his job as education superintendent.

“I apologize for raising concerns over personal matters,” Kwak said in a press briefing yesterday at the Seoul Metropolitan Office of Education building in Jongno, central Seoul. “But I will not be swayed and will stick to my job as Seoul’s education chief.”

The briefing comes one day after Kwak, 58, received a year jail sentence from the Seoul High Court at an appeals trial on Tuesday.

The penalty was much heavier than the first ruling. Initially, he was only fined 30 million won ($26,322) for allegedly bribing his election rival Park Myong-gee, a professor at the Seoul National University of Education, 200 million won to have him drop him out of the education chief race so that Kwak could win. The court convicted him for violating election laws and then Kwak filed for an appeal.

“There were no bargains and deals with Professor Park in return for buying a candidate seat,” Kwak said. “And I have consistently expressed my intentions throughout the election period that I’m firmly against illegal money-trading.”

The court, however, cited his intentions when it handed down its sentencing.

Yesterday, Kwak repeatedly said that he gave money to Park out of a “goodwill gesture,” to save him from the financial distress he was in and said “there were no other intentions.”

At the briefing, Kang Kyung-seon, law professor at Korea National Open University and also Kwak’s best friend, said, “There was a possibility that Professor Park may have chosen suicide [because of his financial situation] and this is why money was given to him.

“There would have been an even fiercer criticism towards Kwak over his inhumane and unethical manners if he had avoided helping Park if he eventually chose the path of suicide,” Kang said.

Kang was also fined 20 million won on Tuesday for delivering the money to Park.

Regarding the question of what he’ll do if the Supreme Court upholds the ruling, Kwak said, “I don’t want to answer any hypothetical questions.”

“The Supreme Court and the Constitutional Court are Korea’s highest jurisdictions and I expect them to differentiate whom to penalize and not,” he said.

If the final ruling finds him guilty, Kwak will lose his job pursuant to the current election law.