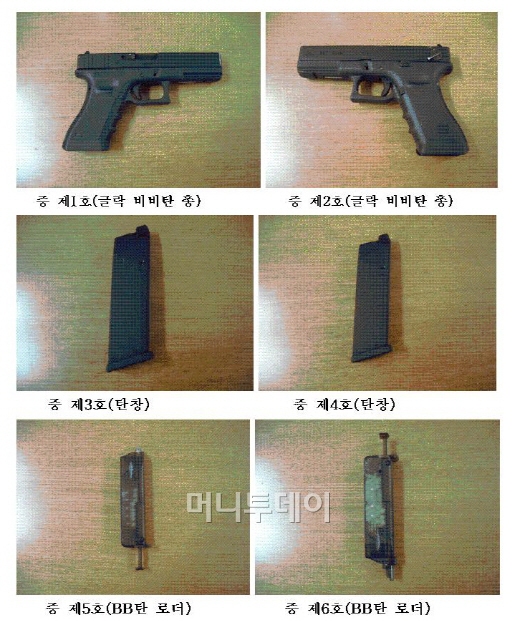 Police have caught one of the suspects who fired BBs indiscriminately at 13 luxury goods shops and cars in Gangnam, southern Seoul, last week.

The police are trying to determine the exact motive of the crime to find out if it was a crime that targeted the upper class.

The Gangnam Police Precinct in Seoul said they have caught a 44-year-old suspect surnamed Baek on Sunday near his home in Insu-dong, Gangbuk District, northern Seoul.

They confiscated two handguns and five magazines loaded with 5-millimeter (0.2-inch) iron BBs from his house and his vehicle as evidence.

The police found a total of 8,000 BBs identical to the ones used in the rampage.

They said last week that they were searching for two unidentified suspects who fired the BBs at 13 shops that sold luxury goods, such as imported cars, jewelry and pottery in Nonhyeon, Cheongdam, and Sinsa-dong and as well as at three parked cars along Gangnam and Dosan Boulevards on April 11. The police are tracking down Baek’s accomplice.

The police tracked down Baek using CCTV footage that contained images of his black Hyundai Grandeur sedan, which he drove onto sidewalks on Gangnam Boulevard to shoot out glass windows and doors.

“Baek has testified that he bought the guns and magazines from stores selling replica guns near Cheonggye Stream, central Seoul,” a spokesman of the Gangnam Police told the JoongAng Ilbo. “He also said that he committed the crime for fun, but we judge that his testimony has very low credibility because he has been changing his words since he was captured.”

The police added that Baek also fired the BBs at 10 shops in Mansu and Guwol-dong in Incheon, a day before the Gangnam rampage.

The police said that other BB shootings happened in Yeongdeungpo, Mapo, and in Jongno District in Seoul in the last month and are currently inquiring whether he is involved in these cases.

The police see this as a crime that targets the wealthy class, assuming that he expressed his social discontent by shooting out the windows.

“They find a perverse pleasure in committing crimes and breaking wealthy people’s property because it makes them feel superior to wealthier or more successful people than they.”

Professor Pyo continued, “Criminals who lack confidence usually choose a gun for their weapon because it gives them relatively more power than any other weapon does, psychologically encouraging them to express suppressed feelings.”

The police said that Baek is unemployed, but makes a little bit of money privately selling tires and automobile accessories.