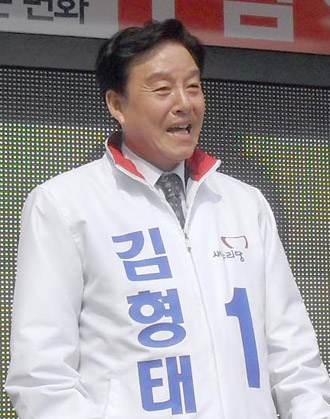 A newly elected lawmaker accused of trying to rape his widowed sister-in-law quit the Saenuri Party yesterday, leaving the conservative ruling party an ultra-slim majority in the next legislature.

Kim Hyung-tae, a former KBS journalist who won last week’s general election from Pohang-South and Ulleung in South Gyeongsang, yesterday issued a press release announcing his decision to leave the party after being accused by his sister-in-law of trying to rape her a decade earlier.

Kim’s exit came only a week after the party scored a narrow victory in the general election, winning 152 out of 300 seats in the National Assembly.

“I am leaving the Saenuri Party because I don’t want to trouble the party and its leader, Park Geun-hye, any further with my unfortunate family affair,” Kim said. “I will clear the issue legally and resolve misunderstandings and return to the party and Park.”

The widow of Kim’s younger brother, who is surnamed Choi, held press conferences on the eve of the April 11 legislative election and during the final days of his campaign. Claiming she was almost raped by Kim a decade ago, Choi released a transcript of a taped conversation with Kim and an excerpt of the recording. In the excerpt, a man’s voice says he made a grave mistake under the influence of alcohol, but did not proceed to what the voice calls the “final stage of a man-woman relationship.”

In his press release, Kim said the incident being described took place around April 2002 when Choi visited him frequently to ask for money. Her husband died of cancer in 1995. “The law enforcement authorities will investigate and reveal the truth as to whether there was a sexual assault or not,” he said.

Choi made a formal complaint against Kim of embezzling money from her late husband’s retirement fund. She hasn’t formally complained of sexual assault.

Kim said earlier the voice on the tape was not his, and he has filed a defamation suit against Choi. He says he was investigated for embezzlement and cleared in 2004. 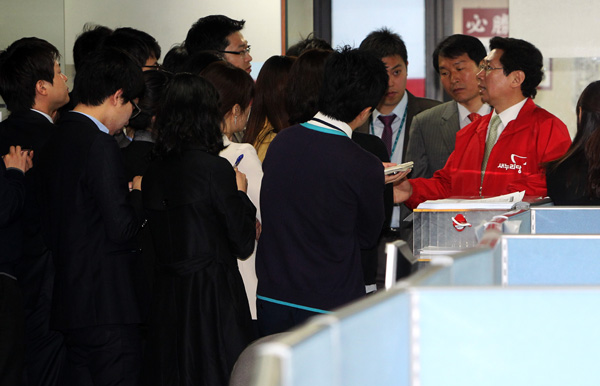 Reporters surround Lee Sang-il, right, spokesman for the ruling Saenuri Party, after lawmaker-elect Kim Hyung-tae called off a press conference and issued a release saying he was quitting the party. [YONHAP]


The Saenuri Party, concerned that the controversy would stain its victory in the general election, had scheduled an ethics committee meeting to discuss Kim’s expulsion.

Even after quitting the party, Kim will keep his lawmaker seat. With Kim’s exit, the Saenuri Party will occupy 151 of the National Assembly’s 300 seats.

The party will lose its majority if another lawmaker-elect quits over a plagiarism scandal. 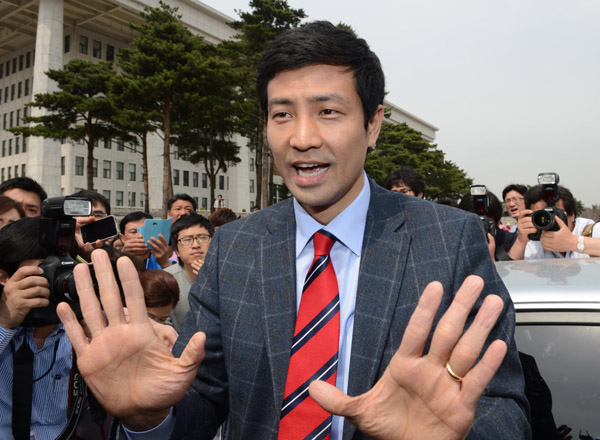 Lawmaker-elect Moon Dae-sung was stopped by reporters yesterday after he suddenly canceled a press conference and tried to sneak out of the National Assembly. By Kim Hyung-soo


Last Wednesday, Moon Dae-sung, a 35-year-old Taekwondo gold medalist and a member of the International Olympic Committee, was elected to represent Saha A District of Busan last week.

In the final days of the campaign, the opposition United Democratic Party accused Moon of plagiarizing a large chunk of his doctoral thesis at Kookmin University in August 2007. The party said Moon’s thesis was almost identical to a thesis by a Myongji University graduate student submitted in February 2007. Moon denied the accusation.

Moon announced he would have a press conference at 2 p.m. yesterday, but canceled it just as it was about to begin. Reporters chased Moon as he ran from the room.

As reporters barraged him with questions, Moon said he wouldn’t leave the Saenuri Party for now.

“Chairwoman Park Geun-hye said she would wait for Kookmin University’s decision on the accusation before making a decision,” Moon said. “The review is progressing fast at the university and I will wait for the outcome. I am not a plagiarizer.”

If the party loses Moon, it could look for new recruits from among independent lawmakers. Three independent candidates won in last week’s elections, and Kim Han-pyo, who will represent Geoje of North Gyeongsang, is considered to be sympathetic to the Saenuri Party’s aims.

The Democratic Liberty Party won 149 seats in the 299-member legislature in the 1992 general election, one seat shy of a majority, but managed to recruit independent lawmakers to expand its size before the term started. The DLP continued recruiting independents and other parties’ lawmakers to eventually occupy 177 seats.