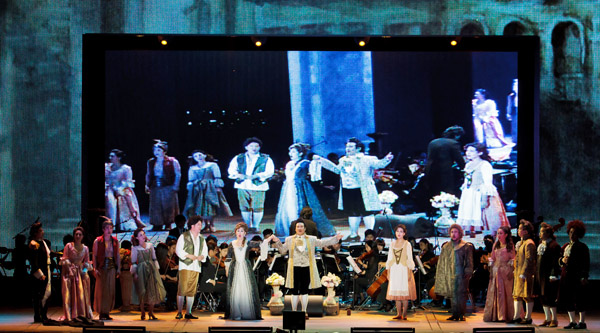 The five opera companies participating in the Korea Opera Festival this year will present highlights of their performances together on May 6 to kick off the month-long event. Provided by the organizers


For some Korean audience, opera has a reputation for being elitist and difficult to understand. To change this perception, the Korea National Opera, together with the Opera Society of Korea, has been holding the Korea Opera Festival for the past three years, trying to make performances more appealing to the general public.

“Although the contents of the operas to be presented during the festival are somewhat familiar, we made efforts to make them appear new by casting new singers and not using the stage sets that have been used for the past year,” said Jo Chang-yeon, chairman of the Korea Opera Festival organizing committee.

Under the theme “Opera from a new angle,” the 2012 Korea Opera Festival will bring five highly praised operas to the Opera House at the Seoul Arts Center from May 6 to June 8. The shows will be performed by the Korea National Opera and four regional opera companies.

“Opera can be difficult for ordinary people, and I frequently overhear people in the bathroom during intermissions of opera performances saying that they nearly fell asleep or that they were going to escape home during the second intermission,” said Kang Min-woo, head of the Nuova Opera Company, which will present “The Tales of Hoffmann” during the festival. “Hearing that gave me heartburn, and that is why my team has [.?.?.] made efforts to present performances at the level of the audience.”

A number of opera company heads said they have adopted tools to help the audience better understand their works.

The New Seoul Opera Company, which will be presenting “The Marriage of Figaro,” said it has prepared a preview video clip that explains the story line of the comic opera.

“Although opera has transformed in many ways to be more familiar to audiences, it is still difficult for some to fully understand and appreciate. The video clip will no doubt help their understanding,” said Hong Ji-won, head of the company.

Widening the appeal of opera has benefits for the company beyond increasing ticket sales, too, with organizers of this year’s festival saying that opera could attract more government support by shedding its elitist image. Finances have been a particular struggle for opera companies participating in the festival this year, due to extremely late decisions made this year in the National Assembly on the national budget, which was only approved on Dec. 30.

“It takes six months for an opera troupe to prepare for a performance, and a venue needs to be reserved at least a year in advance,” said Jo, the chairman of the festival’s organizing committee. “However, as the National Assembly only approved the budget for this festival in late December, we didn’t have enough time to put everything together.”

At that time, lawmakers did allocate 600 million won ($527,000) to the festival, but organizers insisted that the amount they were given was simply insufficient.

“At least 500 million won is needed for each opera company to prepare for a performance,” said Kang from the Nuova Opera Company.

According to the organizers, many Korean opera companies hope to make it known that “opera can be enjoyed by not only musicians or elites but also ordinary citizens as well.” That way, they can receive as much financial support from the government as ballet companies and musical theater groups do. 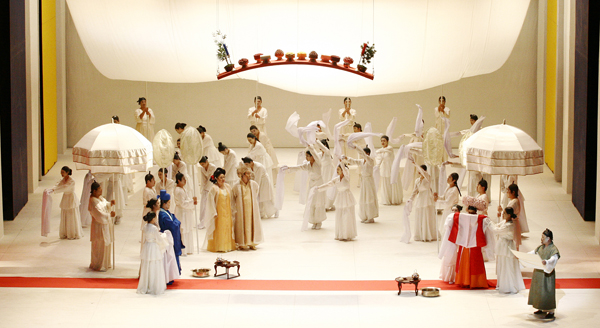 The Korea National Opera will present 12 pieces it has created in the last 50 years to close the festival on June 7 and 8. Provided by the organizer


Kim Eui-joon, head of the Korea National Opera, which will close the festival with its gala performance, said his team will present 12 “highly praised” opera pieces out of many that it has created over the last 50 years.

“I hope that not only famous European operas but also Korean-created opera pieces grow to be more important to audiences through this gala show,” Kim said.

All five opera companies participating in the festival will perform highlights of their operas to kick off the month-long event on May 6.

The festival will come to an end on June 8 with the Korea National Opera’s “The Original Opera Gala Concert” from June 7 to 8.

The 2012 Korea Opera Festival will be held from May 6 to June 8 at the Opera House of the Seoul Arts Center. Tickets range from 10,000 won to 150,000 won for each show. The opening performance will consist of highlights from the five operas to be presented during the festival. It will start on May 6 at 5 p.m. and free tickets can be reserved online.