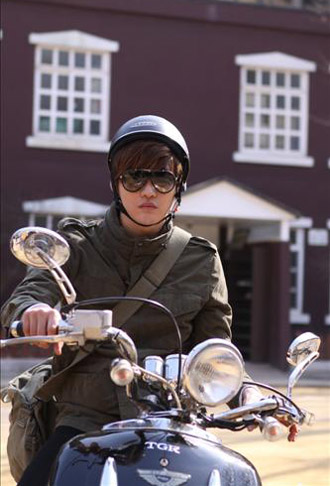 Kim Juno, the elder twin brother of JYJ’s Junsu, is set to make his Korean debut as an actor on TV Chosun’s “Ji Woon-soo’s Stroke of Luck.”

According to the production company on Thursday, Kim will play the role of Dong-hee, a wannabe singer and brother of the protagonist Ji Woon-soo.

The comedy drama centers on Ji, who wins 12.5 billion won ($10.9 million) but pretends to live in poverty in order to avoid paying for things for his family members and friends.

The drama will begin airing from Saturday. Actor and singer Lim Chang-jung plays the stingy protagonist.

“It’s such a privilege and honor to work with such respected actors for my first piece. I think it will be a fun and enjoyable program for all viewers,” Kim said.

Although it’s the first go at acting in Korea for the 25-year-old entertainer, Kim has been active as a singer in Japan since August last year.

His last single “Believe” reached the third spot on the Oricon chart back in December. He has also made appearances on Japanese dramas.