And the award goes to ... the highest bidder!

And the award goes to ... the highest bidder!

Korea’s largest nonprofit arts and entertainment association is under investigation for selling coveted awards to artists. Above, a Korean Cultural Entertainment Award. By Kim Do-hun

As a celebrity approached center stage of the Korean Cultural Entertainment Awards with an envelope in-hand, moments before announcing the recipient of a coveted award, producers cut to shots of the nominees anxiously awaiting the decision. But if the charges brought against Korea’s largest nonprofit arts and entertainment association are true, artists knew well in advance whose name was to be called. The bank transaction had occurred just weeks before.

The association and its members, the names of which cannot be used for legal reasons, are under investigation by the Seoul Central District Prosecutors’ office for embezzlement and a series of cash-for-awards scandals that have shed light on corruption in the seamy underworld of the booming K-pop industry.

With a 50-year history and more than 100,000 members including Gu Bong-seo, Song Hae and The Wonder Girls, the association is well known in Korea and has ties to the Ministry of Culture, Sports and Tourism, which financially supported its annual awards ceremony for 15 years.

Incumbent politicians often attended the ceremony and two are listed as chairs of the association.

Rumors of corruption began to swirl in 2009. The ministry pulled its sponsorship, dissolving the government awards handed out annually, including the Community Service Award and the Culture Minister’s Award.

But while the government jumped ship, association leaders sailed into rougher waters. They continued to advertise the awards ceremony as if the government were still onboard and even gave out awards suggesting they were endorsed by the administration.

The association’s president said the use of Daetongryeong Pyochang, or Presidential Citation, next to awards was simply for internal organization, adding that they kept these certifications “in case the government decides to give the awards again in the future.”

However, another official at the association said the illegality of their awards was an ill-kept secret.

“It has been well-known that the government’s prizes were being handed out even after they were canceled,” the official said on the condition of anonymity.

According to police, corruption in the association ran deeper, with awards being handed out in exchange for cash and officials embezzling government funds. The alleged average price for the Community Service Award was 3 million won ($2,630) while the President of the Federation of Artistic and Cultural Organizations’ Award went for 5 million won.

One rising singer who received last year’s Community Service Award said the association asked him for 5 million won for the President of the Federation of Artistic and Cultural Organizations’ Award. The singer said that when he told the association he didn’t have enough money, it was suggested that he request the Community Service Award instead. Last year, demand for the service award was low, selling for a bargain 2 million won.

“I also received the Community Service Award in 2010, paying 3 million won that year,” the singer said. “Numerous new singers like me who wanted to pay for the prize were lining up.”

The JoongAng Ilbo reporting team revealed that at least 10 recipients paid for awards at last year’s ceremony. Most were lesser-known artists who were paying not just for the award, but for the brief moment on stage.

According to police, this trend is not limited to the 2011 awards show. In 2008, viewers were baffled when the Entertainer’s Good Deed Award, sponsored by the Culture Ministry, was handed to a senior official at a savings bank. At the time, the association said he was eligible for the prize because his father-in-law was a film director.

The fiasco was a major reason why the ministry later pulled its sponsorship. It has now been revealed that the 2008 award was given to the banking official in exchange for 10 million won.

With suspicions rising around the awards procedure, the association allegedly began to forge documents that would create a paper trail justifying its decisions. Certificates of participation at orphanages and nursing homes are among the falsified documents.

But the steps didn’t quell doubts from within the association itself. One official said he started seeing suspect trends, with recipients of an award one year sometimes getting a different award the next. He added that the process was extremely opaque.

“The board of directors just notified us of the list of winners without any discussion about their propriety,” he said.

Unfortunately for the Korean entertainment industry, the association has its hands in more than the annual awards ceremony. 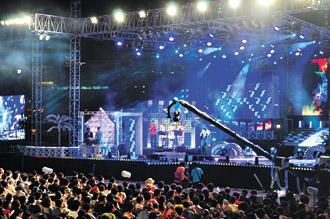 The association is suspected of embezzling city government funds allocated for local festivals. Above, the “Hyeon In Song Festival” in Busan. Provided by the Busan City Government

Officials are now under investigation for embezzlement of the budget for the “Hyeon In Song Festival” in Songdo Beach, Busan. Named after trot singer Hyeon In, who is famous for the song “Be Strong! Keumsun!,” the two-day festival is a large-scale event that attracts more than one million people every year.

Prosecutors now allege that the association made a bogus budget report and embezzled 200 to 300 million won annually from the Busan City Government.

A government official familiar with the situation said that the report is based on documentation and the city is considering what steps to take next.

“The money would be confiscated if the embezzlement turns out to be true,” the official said. Busan has already allocated 380 million won toward the budget for this year’s festival.

The JoongAng Ilbo reporting team also revealed that the association received money from unknown and rising artists in exchange for a spot on a festival stage.

“Instead of paying artists to play, they requested 2 million won for appearing on the stage even on the eve of the festival,” a rising singer said. “They said that the price would be cheaper considering the cost of building the stage itself ran up to 200 million won.”

Other local music festivals the association holds are now also under suspicion of having a hand in similar corrupt transactions.

In May of last year, an association-affiliated branch held the “Creative Music Festival.” Without announcing its winners on the day of the event, the association merely reported the results to individuals via telephone or e-mail.

An official of the association said people who did not even participate in the festival ended up receiving awards. He added that multiple people were awarded the same grand prize.

“It is widely rumored that the winners of several song festivals that the association holds, such as the ‘Silver Song Festival’ and ‘Trot Song Festival,’ were already decided in advance,” the official said.