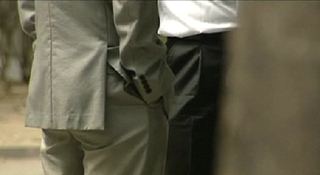 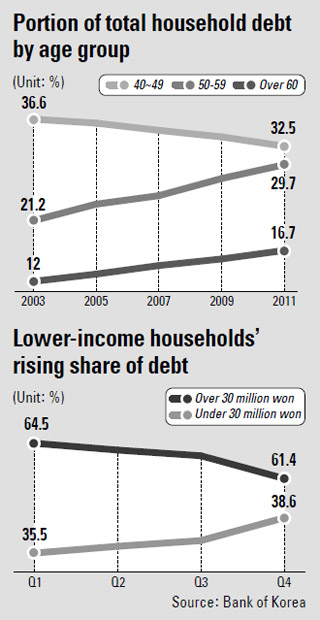 In its first financial stability report, the central bank noted the risk that has been building as households with less disposable income run themselves into deeper debt.

Pressure has been building on the lower-income bracket since last year as inflation has been soaring and banks have tightened their lines of credit, prompting them to seek nonbanking agencies. Even though consumer prices have eased in recent months, many such households say they have not seen any improvement.

Additionally, the central bank’s loose monetary policy promoted lending as interest rates remained low compared to where they were before the financial crunch of 2008.

Last year, those with annual income of less than 30 million won accounted for 38.6 percent of the nation’s total household debt, an increase of almost 10 percentage points from 2010.

This has set off alarm bells due to the heightened risk of soured loans and the ramifications of these on the domestic financial market.

Last year, the nation’s debt to disposable income ratio was 135.5 percent, up from 131.7 percent in 2010. This shift indicates that the ability of households to repay their debts is shrinking.

“The possibility of household loans turning sour on a large-scale in the short term does not seem high as delinquency rates are relatively low [0.7 percent at banks]. Also, high-income earners account for many more of the loans,” said Seong Byung-hee, head of the BOK’s macro-prudential department.

“But unless the situation among low-income households improves, the insolvency rate for household debt centering on such lenders will grow. This would have a huge impact on the real economy as consumer spending could shrink.”

The increasing debt from people aged 50 or older has become another major issue.

This age demographic accounted for 46 percent of all household debt last year, up from 33.2 percent in 2003. This percentage is expected to keep swelling due to Korea’s graying population.

Many of the retiring baby boomers today took out loans to buy expensive apartments when the real estate market was peaking between 2005 and 2007.

According to the report, more than half of all loans for high-end housing last year were taken out by people aged 50 and upwards.

Meanwhile, of all the loans taken out by private entrepreneurs in 2008, people in their 50s and older, accounted for 47 percent. Last year, the proportion rose to 53.9 percent.

The central bank said that more borrowers from these two groups - retirees and low-income households - are turning to nonfinancial institutions that are prepared to shoulder the risk they represent for higher returns.

As a result, lending from noncommercial banks accounted for slightly more of the total.

The financial report that was announced yesterday is the first of its kind to be handed to the National Assembly.

The central bank will release the financial stability report twice a year, with the next scheduled for October.