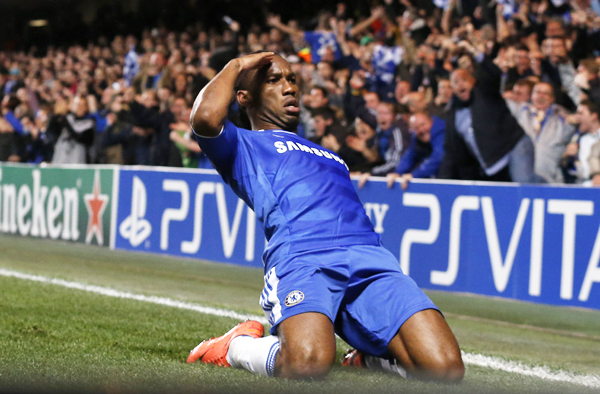 
LONDON - Chelsea produced a performance of resilience and ruthlessness to hand Barcelona its first Champions League loss in 14 months on Wednesday, winning 1-0 at Stamford Bridge to leave the semifinal delicately poised ahead of the second leg in Spain.

The irrepressible Didier Drogba grabbed the winner in first-half injury time with Chelsea’s only shot on target in a match it spent almost entirely on the back foot, leaving Barcelona to rue its failure to claim a crucial away goal.

The Spanish giants enjoyed 72 percent possession and were camped inside Chelsea’s half for long periods, but were denied by a mixture of poor finishing and brave defending in driving rain in southwest London. Gary Cahill was outstanding alongside center-back partner John Terry to repeatedly repel Argentina forward Lionel Messi, who failed to score for only the second time in his last 15 matches, while Alexis Sanchez and Pedro both saw shots hit the goal frame.

“Now they are favorites,’’ Barcelona coach Pep Guardiola said. “One-nil is a good result for them. You can imagine them having 10 players behind the ball again [at the Camp Nou].’’

Unbeaten in its last six matches against Barcelona, Chelsea is one of the few teams in the world to cause problems for Guardiola’s side in recent years. Barca is unlikely to squander so many opportunities on Tuesday, though, as Messi looks to add to his amazing haul of 63 goals this season.

“It was almost perfect,’’ interim Chelsea manager Roberto Di Matteo said. “When you play Barcelona, you have to do a lot of defending and they have all the possession. You have to limit their threat and be clinical when you get your chances.

With a must-win “Clasico’’ against Real Madrid in the Spanish league to come on Saturday and then the return leg against Chelsea three days later, Barca has little time to regroup if it wants to reach the Champions League final for the third time in four years and become the first team to defend the title.

Much will be made of Barca’s profligacy. Yet Chelsea, which is only sixth in the Premier League and may need to win the Champions League to qualify for next season’s competition, displayed commendable work rate, cohesion and discipline under almost constant pressure.

As the lone striker, Drogba was Chelsea’s only outlet, but on the rare times he managed to snaffle possession, he gave Carles Puyol and Javier Mascherano - a midfielder playing out of position at center back - trouble with his power.

“Didier Drogba was incredible,’’ Terry said. “He was up there against some of the best in the world on his own but he holds it up and makes us play.’’

Drogba’s goal came following a rare mistake in possession from Messi, allowing Frank Lampard to pick out the surging Ramires with a crossfield pass. The Brazil midfielder bore down on goal but crossed the ball across the area for Drogba to scuff a shot that still had enough to beat goalkeeper Victor Valdes.

It was his 38th Champions League goal, with only Messi having scored more since the 2003-4 season.

The last time Chelsea played against Barcelona - the highly-charged second leg of their 2009 semifinal when the Spanish team progressed thanks to Andres Iniesta’s stoppage-time goal - an apoplectic Drogba left the pitch at Stamford Bridge roaring abuse at a referee for which he received a three-game ban.

Three years on, he was all smiles as he lapped up the acclaim of the home fans throughout the game and at the final whistle. AP