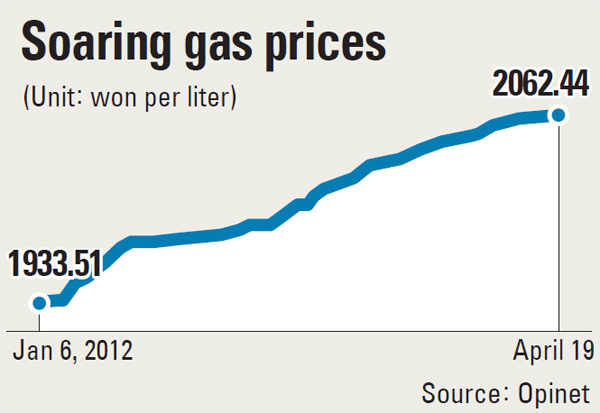 In a move to boost competition among the four existing oil refiners and to bring down soaring fuel prices, the Korean government yesterday announced that Samsung Total Petrochemicals will become another petroleum provider in June.

The move came six days after President Lee Myung-bak raised a question at a meeting with ministers if the high oil price was a result of the oligopoly of the four local oil refiners, SK, GS, S-Oil and Hyundai Oilbank.

The Ministry of Knowledge Economy also said it will encourage more altteul, or “thrift” gas stations to open, especially in Seoul, but it rejected the idea of a petrol tax cut.

“The burden of the high fuel prices has fallen on consumers because there has been limited competition among the four oil refiners,” said Minister of Knowledge Economy Hong Suk-woo yesterday at a press briefing. “We decided that adding one more petroleum provider in the market would contribute to stabilizing fuel prices in the long run.”

Samsung Total has a capacity to make 37,000 barrels of gasoline a month, which it has been exporting to Japan, and will increase capacity by 88,000 barrels starting in May.

Samsung Total does not plan on becoming a gas station operator itself.

“We are providing gas fuel to thrift gas stations as we were asked by the government, but we don’t plan on becoming an oil distributor,” said Samsung Total in a release yesterday.

The company is still in talks to decide how much fuel it will provide at what price.

With the arrival of a fifth oil provider, the government expects to see a 30 won ($0.03) to 40 won fuel price drop per liter at thrift gas stations.

Altteul stations first opened in Korea last November and will increase to 1,000 by the end of this year, according to the government yesterday. The stations are part of the government’s campaign to reduce inflation.

As of April 17, there were only two thrift station operating in Seoul and 86 operating across the nation.

Also, a three percent tariff on imported oil electronically traded on Korea Trade will be lifted and the 16 won per liter tax for oil importing activities will also be removed.

But the effect on prices is likely to be minimal since the gasoline provided by Samsung Total will be around two percent of the total local oil supply.

“The government’s efforts to reform the oil distribution structure should be applauded, but the local market for oil will be minimally changed,” said Kim Ja-hye, director general of Consumers Korea.

Consumers Korea says a cut in fuel taxes would have a greater influence on pump prices. But the government is standing firm on its statement that it won’t cut the tax unless the Dubai crude oil price goes over $130 a barrel.