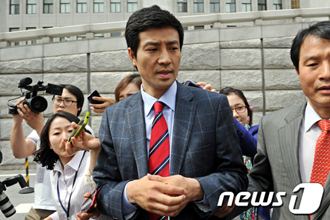 The ruling Saenuri Party is putting pressure on an athlete-turned-politician to quit, following an accusation of plagiarism, not wanting the bad press to taint its victory in the legislative election last week.

Moon Dae-sung, a 35-year-old Taekwondo gold medalist at the 2004 Athens Olympics, won a National Assembly seat in Saha A District of Busan last week, but in the final days of the campaign, the opposition United Democratic Party accused Moon of plagiarizing a large chunk of his doctoral thesis.

Moon has refused to quit. Another representative-elect from the party, Kim Hyung-tae, quit the Saenuri Wednesday after being accused of embezzlement and attempting to rape his widowed sister-in-law a decade ago. The party’s majority in the National Assembly whittled down to 151 out of 300 seats after Kim’s quitting.

Lee Sang-il, spokesman of the party, said yesterday that the party is refering Moon’s case to its ethics committee. The party will come up with punitive measures if there was wrongdoing on his part, he said.

Ruling Saenuri Party leader Park Geun-hye also took aim at Moon yesterday, saying she will not look the other way if a person in the party becomes an obstacle to fulfill its promises to the people.

“If our party tears itself apart over things unrelated to the lives of the people?[...]?and goes back to pure political wrangling, then the people will judge us negatively before we get a chance to retain political power,” Park said, referring to the presidential election in December.

Moon told reporters yesterday he will accept the decision of the ethics committee, which is expected to convene on Monday, according to a source.

Moon has served as professor of physical education at his alma mater, Dong-A University in Busan, since 2006 and as an International Olympics Committee member since 2008.

Moon scheduled a press conference Wednesday, at which he was expected to quit the party, but he cancelled right before it began.

Expelling Moon will risk the Saenuri losing its majority in the Assembly, but analysts expect it to lure independent lawmakers to join its ranks.