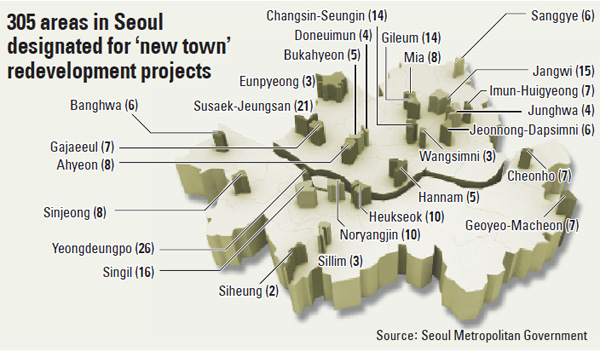 The Seoul Metropolitan Government is accelerating its scaling back of “new town” redevelopment projects, which was started in 2002 to help develop old and shabby neighborhoods into modern apartment complexes.

Yesterday, the city released a bill amending the Urban and Residential Environment Readjustment Act that lifts the designation of new town areas in Seoul if the majority of residents living in the area oppose. The bill also states that at least half of the apartment units in the redeveloped areas should be smaller than 60 square meters (646 square feet) so that low- and middle-income households are able to afford living in the areas.

According to the amended bill, districts will have to disclose the amount being spent on developing the areas as well the appraised value of the old houses and the estimated cost of new housing in the area after the project is complete. Previously, residents were notified of the appraised value of their old houses or the price of the new units in the projects’ final stage.

“Seoul City will decide the direction of each redevelopment project after gathering residents’ opinions,” said Lee Geon-ki, head of the city’s housing policy department, in a briefing yesterday at the Seoul City Hall in central Seoul.

The ordinance will come into force from the day of its promulgation in July.

Yesterday’s announcement by Seoul comes after liberal Seoul Mayor Park Won-soon said in January that the city will re-evaluate 610 areas that were designated for new town development projects and decide their fate - whether to start construction or not - after taking into consideration various conditions such as economic feasibility and residents’ opinions.

Park wants to eventually scrap the redevelopment projects because he thinks they don’t benefit poorer residents of the areas being redeveloped - many of whom don’t own the houses or apartments they live in - and mainly benefit the wealthier people in the area who own real estate, the redeveloping companies and relatively wealthy people who invest in the new towns. Redevelopment also leads to higher rents and real estate speculation, Park believes.

There is also a political angle.

The project was initiated by President Lee Myung-bak a decade ago when he was mayor of Seoul along with his ambitious restoration project of Cheonggye Stream in central Seoul. Oh Se-hoon, Park’s ruling party predecessor, continued the new town projects. But Park is an independent supported by the main opposition parties.

There are concerns, however, that the 180-degree turn in the new town policy will further depress Seoul’s weak real estate market. Analysts note that the city’s apartment reconstruction market has been sluggish since Park’s election last October.

There are also criticisms that the announcement yesterday didn’t explain how the city will make up for the money already spent on new town projects.