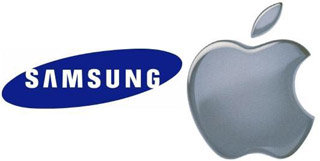 Samsung Electronics launched a counterclaim against Apple in a California court this week, escalating the global patent infringement tussle in spite of earlier hints of a more conciliatory mood between companies that are at once technological rivals and business partners.

A spokesperson for Samsung Electronics confirmed yesterday that Samsung had filed a counterclaim in the Northern District court of California earlier this week in response to a complaint filed by Apple in February.

In the most recent filing, Samsung accused Apple of violating eight of its patents - the same number of patents the iPhone maker accused Samsung of violating in February.

Two of the patents that Samsung claimed Apple violated are FRAND patents, short for “fair, reasonable and nondiscriminatory,” which refers to intellectual property rights that are included in industry standards and therefore must be licensed under equal terms to any party.

This is noteworthy, as the European Commission is currently investigating Samsung over the same abuse against Apple.

Samsung’s move, part of a strategy described by some as “the best defense is a good offense,” follows news on Monday that the two rivals had agreed to send their chief executives to settlement talks under the auspices of the same court.

“The dispute in the U.S. began when Apple first filed a suit last April, and [Samsung] countersued in June,” said a spokesperson for Samsung Electronics. “Before deliberations begin in earnest in the latter half of the year, the court ordered the two companies to try and settle for 90 days.”

The latest suit contradicts some analysts’ views that impending settlement talks signaled a change in the companies’ hard-line positions in a battle involving 30 lawsuits in nine countries.

In a report released Thursday, LG Economic Research Institute research fellow Lee Jong-keun wrote, “[Apple CEO Tim Cook] appears to have decided that drawing out a settlement is more advantageous for Apple in the end, considering it’s engaged in a legal battle with a company that remains a vital partner in supplying [Apple] with key components.”

Meanwhile, the battle for market share in tablet computers between the tech giants escalated yesterday as the new iPad went on sale in Korea. Samsung plans to release both a 7-inch and 10-inch Galaxy Tab 2 in April in the U.S.