Korean Air pilot looks back at first flight to U.S.

Korean Air pilot looks back at first flight to U.S. 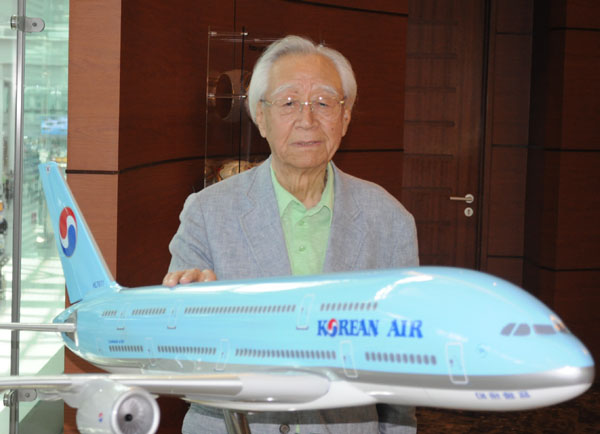 
At 6:10 p.m. on April 19, 1972, a jumbo jet clearly marked as a Korean aircraft landed at Los Angeles International Airport. It was the first Korean Air flight to land on American soil. Korean expatriates waved national flags when they saw the flight and cried out, “Daehanminguk Manse!” with some tears.

“Foreign airlines that used to downplay Korea had to acknowledge our aviation technological prowess,” said Kim Yang-wook, 87, the first captain of Korean Air.

Kim recalled the memory of his first flight to the U.S. 40 years ago.

“I will never forget the warm welcome of the overseas Koreans,” he said.

Kim, born as the eldest son of a doctor, defied his father to become a pilot. He became endlessly fascinated with aircraft after boarding a small airplane in Seoul when he was a middle school student.

During the Japanese colonial period, Kim enrolled in the Chosun Flight School in Daegu and received a pilot’s license from the Japanese- controlled government at the age of 19.

After liberation from Japan, Kim joined the Korean Air Force as one of its first members. In 1960, he then entered the company that would become Korean Air. After two years, he became the first captain in the country.

Kim said he has some dizzying memories about his early days of flying to the U.S. He had to take off from Hawaii with one of four flight engines broken. During the flight, another one went out.

“I just trusted my luck and did my best,” Kim said.

One day, Kim remembers, some pilots from Delta Air Lines were aboard a flight he piloted, and they requested to meet the captain.

“They asked me how I could manage to take off and land so softly,” he said.

Kim has raised an “aviation family” of sorts. His eldest daughter served as a flight attendant, while his son-in-law currently works at the U.S. Federal Aviation Administration.

This Thursday marked the 40th anniversary of Korean Air’s first departure to the U.S. Back then, the national airline started off with flights to Los Angeles and Honolulu.

During the past four decades, the number of American routes has surged to 13, including 10 to the U.S., two to Canada and one to Brazil. The number of passengers on these routes rose from 43,314 in 1972 to more than 2.85 million as of last year, jumping by 65 times.