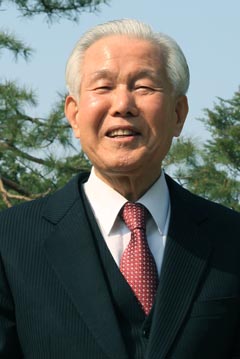 It took 52 years for Rhee In-soo, the adopted son of Korea’s former President Syngman Rhee (1875-1965), to pay respects to the victims of the April 19 civil uprising that took place in 1960.

On Wednesday, local media reported that in January, Rhee In-soo, 81, paid tribute to the victims at the national cemetery in Gangbuk District, northern Seoul. Most of those killed in the uprising against the dictatorial rule of President Syngman Rhee were students.

“I went there as one of the participants of the uprising and also as President Syngman Rhee’s son,” he said in an exclusive interview with the JoongAng Ilbo on the day after the report. The interview took place at Ewhajang, the former president’s residence preserved in Ihwa-dong in central Seoul.

“During his lifetime, my father always felt sorry for those who were killed during the uprising,” the younger Rhee said.

Those participating in the uprising alleged that Syngman Rhee, Korea’s first elected president, was involved in an election fraud. He had served three consecutive terms and was elected to a fourth presidency, though was later forced out of his post and exiled to Hawaii.

Saying that he was one of the participants in the uprising who condemned the corruption, Rhee In-soo added that he wanted to honor his friends for their great sacrifices. Rhee was adopted by the president in 1961 after the violent demonstration took place.

Rhee had wanted to go to the cemetery on April 19 last year, but he was blocked by the families of those who died in the uprising. They shouted at Rhee for offering insincere apologies.

“I understand why they are against me visiting the cemetery, but I wish at least some would understand me as well,” Rhee said.

The JoongAng Ilbo sat down with Rhee and asked him more about what he was thinking.

Q. What did former President Syngman Rhee think about the April 19 uprising?

A. He didn’t think of it as negative. After he resigned from his presidency, then-Taiwanese President Chiang Kai-shek sent him a letter of condolence, and he wrote back saying that the uprising happened because he was occupied with international affairs and didn’t look after the people. He also wrote in the letter that Korea’s future was bright because of its many righteous students. He said he regretted that the victims were shot instead of himself.

Did you really participate in the April 19 uprising?

When the uprising happened, I was working for Hyundai Engineering & Construction after graduating from college. I personally participated in the uprising because I felt angry about the election fraud. I even went to the then-parliament to protest and also to Lee Ki-poong’s house. Lee was the vice president-elect at that time and involved in corruption. Most people are probably not aware of this.

But bereaved families are not happy about your efforts to pay respect to the victims.

Yes, I understand how they feel. But paying respect was what I had to do. I wanted to visit the national cemetery personally last year, too, but with the media reporting about my planned visit, things became chaotic. There are no political motives attached to my visit.

What do you think about the mixed feelings people hold about former President Syngman Rhee?

Now that I’ve paid tribute to the victims, I feel much better. I’m currently writing about my father and my mother. [Former President Rhee had an Austrian wife, Francesca Donner].