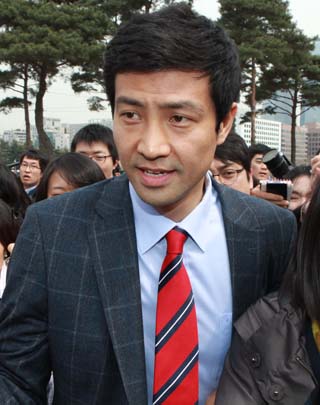 Moon Dae-sung, the Olympic gold medalist and National Assembly respresentative elect from Busan, abandoned the ruling Saenuri Party yesterday after his alma mater, Kookmin University, confirmed that he plagiarized his doctoral thesis in 2007.

Following the departure of Kim Hyung-tae, a representative-elect from Pohang-South and Ulleung in North Gyeongsang who was accused of embezzlement and the near-rape of his widowed sister-in-law, Moon’s quitting wipes out the slim majority in the National Assembly won by the party in last week’s general election. The party now has 150 seats in the 300-seat assembly.

“Not only that but a significant portion of the writing in the introduction, the theoretical background and the arguments in the two theses are so identical that we concluded this goes beyond what is normally permitted by the academic community,” Lee said.

Minutes after the school’s announcement, Moon issued a statement to announce his departure from the ruling party. But he did not say whether he will forfeit his assembly seat. “I am going to leave the Saenuri Party today,” Moon said. “I apologize for causing a public disruption.”

Moon said he hoped his leaving would ease public pressure on the party and allow it to focus its energy on improving the quality of life for the general public. He also apologized for confusing the public by reversing a decision to announce his departure from the party on Wednesday.

At the last moment, Moon cancelled a press conference on Wednesday, at which he was expected to quit the party, saying that the issue was uncertain and he wanted to wait until the Kookmin investigation was over.

Party leader Park Geun-hye said Wednesday that she would not look the other way if a member threatened the party, apparently pressing Moon to quit. The party referred Moon’s case to its ethnics committee on Wednesday.

The opposition Democratic United Party, which raised the plagiarism allegation against Moon, demanded yesterday that he quit his assembly seat.

“A politician who has lied, plagiarized his thesis and cheated people has no grounds to sit in the National Assembly,” Park Yong-min, spokesman of the DUP, told a media briefing.

The DUP also called on the Saenuri Party to take responsibility for an “insincere nomination” of Moon as a candidate and urged it to press Moon to forfeit his assembly seat.

Moon’s departure follows that of Kim Hyung-tae, who quit the Saenuri Party on Wednesday after being accused of embezzlement and attempting to rape his widowed sister-in-law a decade ago. Some analysts expect the Saenuri Party to regain its majority status by luring independent lawmakers to join its ranks, as the party has in the past.