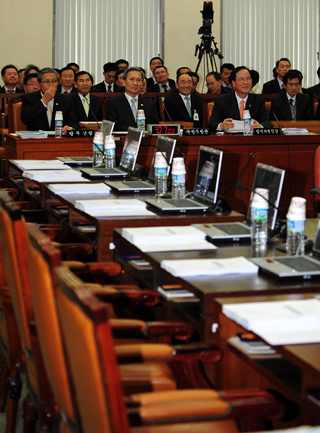 Opposition party lawmakers boycotted the National Defense Committee of the National Assembly yesterday, which is expected to review important pending bills on national defense. As a result, the bills were scuttled this assembly. [NEWSIS]

Ahead of the final plenary session of the outgoing National Assembly next week, ruling party lawmakers yesterday expressed concern over a major pending bill aimed at preventing physical clashes in parliament, saying it will turn the Assembly into a “vegetative state.”

The move comes days after floor leaders of the rival parties agreed to pass a bill aimed at promoting compromise and preventing physical scuffles in parliament during the final session slated for Tuesday.

The bill calls for limiting the parliamentary speaker’s authority to put a bill to a floor vote, an action which in the past often resulted in brawls between rival lawmakers over the passage of controversial bills.

Under the proposed revision, the speaker can evoke his or her authority only in the event of a national emergency, natural disaster or war.

Moreover, a consensus of three-fifths of the 300-seat National Assembly, or 181 seats, will be required to demand a fast track vote, or thwart filibuster by minor parties, instead of the current majority rule.

In South Korea, lawmakers are often associated with negative images due in large part to widespread public perceptions that they do not compromise but are bent on partisan bickering that often involves shoving, pushing and other physical confrontation.

Chung Eui-hwa, the acting National Assembly speaker from the ruling Saenuri Party, and other ruling party lawmakers, said the pending bill would nullify the majority rule of democracy in passing bills.

“In our history, not a single party has commanded three-fifths of seats. The proposed rule, if passed, will contradict the Constitution’s majority rule,” said Chung. “It is also feared that no disputed bills will pass parliament, as the culture of dialogue and compromise is still immature in our politics.”

Chung went on to say the parliament would suffer a “locked-in syndrome,” a medical term referring to a patient who is sentient but unable to move or communicate. “The parliament will be in a state of paralysis.”

The main opposition Democratic United Party remained firm in its stance, however, saying it “will not change” the bill.

“The parties took a long time to agree on the bill,” Noh Young-min, the DUP floor spokesman, said in a phone interview with Yonhap News Agency. “The new system will set a new frame of parliament as rival parties will not be able to solve any pending issues without dialogue and debate.

“It will mark a new era of the legislative body.”