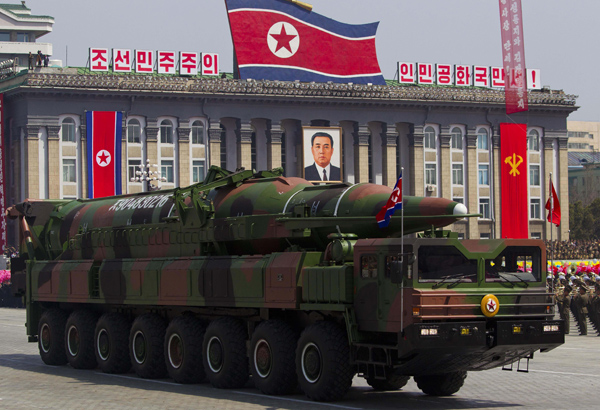 In this April 15, 2012 file photo, a North Korean vehicle carries a missile during a parade in Pyongyang. [AP/YONHAP]

“I’m sure there’s been some help coming from China. I don’t know, you know, the exact extent of that,” Panetta told members of the House Armed Services Committee when asked whether China had been supporting North Korea’s missile program through “trade and technology exchanges.”

North Korea’s powerful Asian neighbor is Pyongyang’s only major ally, with military and economic ties dating back to the communist origins of the two nations.

On Wednesday, Pyongyang said it was ready to retaliate in the face of widespread condemnation of the failed launch, increasing the likelihood the isolated state will go ahead with a third nuclear test. 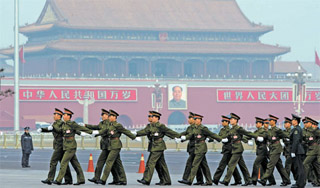 After last week’s launch, which the U.S. said was a disguised long-range missile test but which Pyongyang insists was meant to put a satellite into orbit, the Obama administration said it had suspended a food aid deal.

China, Pyongyang’s main economic and diplomatic backer, has called for “dialogue and communication” as tensions with North Korea mount. On Thursday, South Korea said it had added a cruise missile to its arsenal that could hit anywhere in the North.

In Thursday’s hearing, Republican Rep. Michael Turner pressed Panetta about a transporter launcher system - essentially a large truck on top of which a missile is mounted - that North Korea showcased during a military parade on Sunday, which he said appeared to be made in China.

Panetta declined to give additional details about any Chinese support for North Korea’s missile capabilities in a public setting due to “the sensitivity of that information.”

“But clearly, there’s been assistance along those lines,” the defense secretary said.

Panetta said there was “no question” North Korea’s efforts to develop long-range missile and nuclear weapons capability were a threat to the United States. “For that reason we take North Korea and their provocative actions very seriously,” he said.

“And China ought to be urging them to engage in those kinds of ... diplomatic negotiations. We thought we were making some progress and suddenly we’re back at provocation,” he added. Reuters