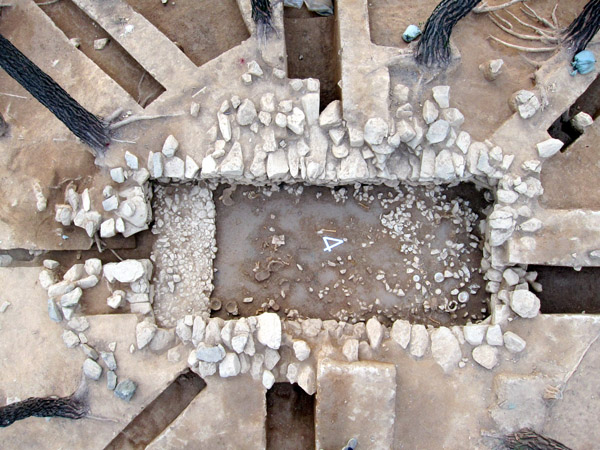 The view of one of the open tombs from the sixth century. [JoongAng Ilbo]

Korean archaeologists found relics from tombs in Suncheon, South Jeolla, which may refute the theory by some Japanese scholars that Japan ruled most of the southern part of the Korean Peninsula between the late fourth century and mid-sixth century.

Some 200 relics such as gold earrings, horse tack, weaponry, pottery and jade, among others, were recovered from a total of six tombs containing wooden coffins and two other tombs in the region, which is about 415 kilometers (257 miles) south of Seoul, Sunchon National University Museum announced on Thursday.

The tombs belong to people of the ruling class in the Suncheon area from around 500 A.D.

The latest discovery came from the third round of excavations on the site that the museum conducted since February of this year. (The first and the second rounds took place in 2006 and 2008, respectively).

Left: Gaya-style pottery from tombs in Suncheon, South Jeolla, which challenge the theory that Japan ruled much of southern Korea between the fourth and sixth centuries. right: A set of gold earrings.

Museum officials say the relics contradict the theory supported by some Japanese scholars that Japan ventured into the southern part of Korea in the late fourth century and ruled over Baekje (18 B.C.-660), Silla (57 B.C.-935) and Gaya (the confederacy of territorial polities in southern Korea between the first and sixth centuries) until the mid-sixth century - even setting up a command post called Imna Ilbonbu in Gaya.

“If the theory were true, we should’ve found Japanese relics, but that wasn’t the case. We only found mass amounts of Gaya relics,” Lee Dong-hee, a researcher at the museum told the Korean media. Suncheon is thought to have been a part of Gaya.

“The discovery should be the starting point where people can reexamine and deny such a theory,” Lee added.

Along with other subjects - such as the territorial dispute over the Dokdo islets, the compensation issue of the comfort women, or women forced by Japan into sexual slavery during World War II - Japan’s alleged dominance of a large portion of the southern part of the Korean Peninsula has been a thorny historical subject.

Some Korean pundits say such a theory would’ve made it easy for Japan to justify its colonization of the country between 1910 and 1945, under the pretext of reclaiming its right to rule.

In fact, some right-wing Japanese textbooks introduced such a theory as a historical fact last year, triggering strong protest from Koreans.