ELS not paying off for all

ELS not paying off for all


Equity-linked securities (ELS) represent the hottest investment in Korea’s financial market these days as traders are rushing to snap them up. 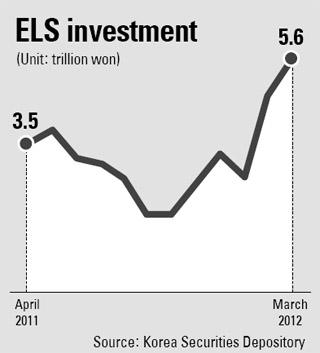 Some 3.6 trillion won ($3.16 billion) of publicly offered ELS, which require an investment of 1 million won or more, were sold in April 2011. But this jumped to 5.6 trillion won last month as appetite for the financial product continues to grow.

ELS were introduced to the local market in 2003 as derivatives offering diverse avenues of profit by investing in single stocks or bonds, a group of stocks or an equity-based index.

They usually mature in three years but the promised profit rate is often paid out much earlier within four to six months.

The biggest difference between them and equity funds is that ELS are considered safer but also have a maximum profit rate.

However critics have expressed concern that many bigger investors are landing windfalls while smaller players are losing out.

The former also tend to enjoy lower commission rates as brokerages compete for their business.

One bank offers a 0.5 percent commission rate on its privately offered ELS, but those subscribing to its publicly offered ELS must pay double this.

“We give exclusive treatment to customers who make huge investments,” said an official at the bank.

The private banking center of one local brokerage firm runs its 30-odd privately offered ELS products conservatively and has never made a loss, it said, declining to be named.

One of its clients, a 55-year-old man, saw healthy returns after he poured 500 million won into a privately offered ELS that invests in stocks considered to be undervalued.

In contrast, a 42-year-old who joined a publicly offered ELS run by a brokerage firm two yeas ago was only able to salvage 80 percent of his principal investment.

The ELS invested in Doosan Heavy and OCI.

However, losses were made after Doosan Heavy’s stock nosedived in the second half of last year. The share had not recovered by the time the ELS matured.

According to the Korea Securities Depository, 76 percent of ELS products do not guarantee that principal payments are repaid.

More small buyers are losing their investment as they withdraw before the product matures, making them subject to a 10 percent commission rate.

In the first three months of 2012, some 339 billion won of the 8.9 trillion won paid into ELS products was withdrawn prior to them maturing.

“There are much fewer cases for privately offered ELS products,” said an official at a brokerage.

Cynics say the ELS boom is not being driven by their potential yields for investors, but by the money the brokerages that manage them can rake in.

“The real reason so many ELS are sold .?.?. is because there’s so much to be made from selling them,” said a high-ranking official at a financial company.

Another employee at a local brokerage said more clients are showing an interest in them these days because the probability of guaranteeing the principal investment and profit has risen.

But more so the primary reason is due to the competitive marketing from brokerage firms driven by profit gained from commission on the ELS investments.

“For brokerages, customers show less resistance to the commission payments than other funds,” the official said.

“Additionally, the rate at which customers are switching to other ELS products is so high that there are a lot of commissions to be made.”

The speed with which profits can be reached is another incentive, and this makes investors less sensitive to the commission they have to pay, he added.

“No matter how good a product is, it is never a good thing that all the money in concentrated in a certain type of investment.”

Another official from an asset management company warned of the high level of risk that investors could face from splurging on ELS.

“When the market is seeing only mild fluctuations, ELS can be profitable for both investors and financial companies, but one should consider what happens when the market is hit with sudden volatility,” the official said.