Exhibit displays pottery as it’s meant to be seen

Exhibit displays pottery as it’s meant to be seen 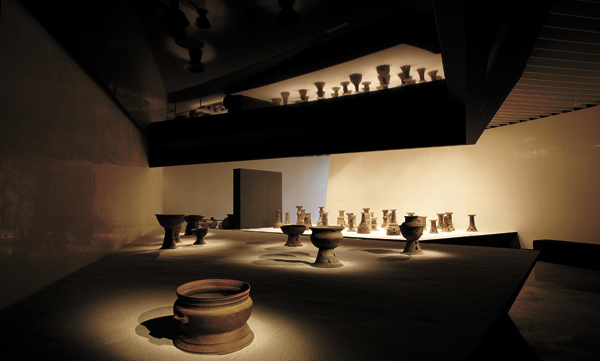 Horim Museum officials say that the best way to enjoy their pottery exhibition is to view pieces together with their carefully selected surroundings. Provided by the museum


Koreans have always been picky about their pottery, preferring celadon, white porcelain and buncheong ceramics, whose colors range from creamy white to warm shades of black.

Outside of these varieties, pottery has mainly been a niche fascination among archaeologists, who care more about how and where they were uncovered rather than their aesthetic value.

But a new exhibit dubbed “Earthenware” offers a rare peek at a more varied selection of pottery that can appeal to the average museumgoer. 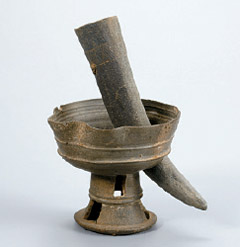 The exhibition showcases some 200 pieces used from 1 B.C. to the Unified Silla period (668-935) and is divided into three themes: wish, time and the earth.

It celebrates the 30th anniversary of the Horim Museum, which opened in October 1982 led by Yun Jang-sub, the chairman of the Sungbo Cultural Foundation.

Today, along with Kansong Museum and the Leeum, Samsung Museum of Art, Horim is thought to be one of Korea’s best private museums.

Its collection includes some 15,000 cultural properties, including eight national treasures and 46 treasures. Potteries and ceramics are thought to be its particular strength. 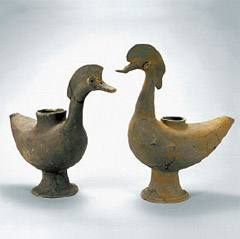 As can be seen in the “wish” section of the exhibit, earthenware was often a tool through which Koreans expressed their hopes, especially for recently deceased family members.

Much of the recovered earthenware on display were gifts buried next to loved ones meant to be carried into the afterlife.

One is in the shape of a boat, presumably meant to assist in crossing the waters that were believed to separate life from the afterlife.

Other pieces are also related to transportation, including a horse wheel and shoes, all of which museum officials say embody the hope that the dead will travel safely to the afterlife. Duck- and chicken-shaped pottery pieces were meant to act as guides to the dead. 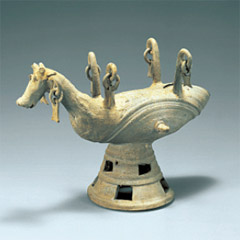 The time-themed exhibit shows how Korean pottery has changed over the years, both in use and in production.

Original earthenware is also on display, as it is used by Korean households on a daily basis.

Jangdokdae, a platform for containers of sauces and condiments, is one example, although these have been replaced with kimchi refrigerators in most houses today. 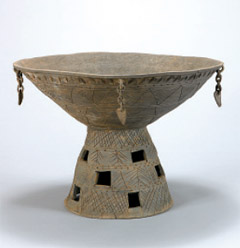 At the exhibit themed for the earth, visitors can get up close and personal with the pieces on display as they are not displayed in glass boxes but rather in soil, showing their strong ties to the earth.

Tehje Architects, which designed the Sinsa-dong branch of the museum, took part in the design of the exhibition, said Lee Won-kwang, a museum official.

“The more muted pieces show the beauty of austerity, while pieces with more decorative details show a sense of creativity,” Lee added.

Critics said it is clear that the museum officials gave a lot of thought to the presentation of the ceramics, adding that the showing could be seen as a “convergence exhibition” that seeks a modern presentation of ancient relics.

Museum officials also suggest that visitors do more than enjoy each piece individually, and recommend examining their carefully selected surroundings that add to the experience.

For instance, some selected pieces of pottery are exhibited on white sand, and taken together, the presentation can almost be considered a form of installation art.

In the fall, earthenware designated as national treasures will be added to further broaden offerings for visitors, museum officials said.

The exhibition runs until Sept. 28. Tickets are priced at 8,000 won ($7). Admission is free on the last Thursday of every month.

For more information on the exhibition, visit www.horimmuseum.org or call (02) 51-3523.