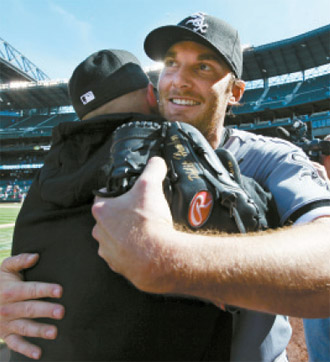 Chicago White Sox pitcher Phil Humber, right, is embraced after a perfect game against the Seattle Mariners on Saturday. [AP/YONHAP]

Humber became the first major league pitcher to throw a perfect game - a victory in which no opposing player reaches base - since Philadelphia’s Roy Halladay accomplished the feat against the Florida Marlins on May 29, 2010.

The White Sox beat the Mariners 4-0.

Humber’s was the first perfect game or no-hitter in the Major League this season.

The 29-year-old right-hander became the third White Sox player to record a perfect game and the first pitcher to throw a perfect game against the Mariners. The last time Seattle failed to get a hit in a game was on May 14, 1996, against pitcher Dwight Gooden of the New York Yankees.

A crowd of 22,472 at Safeco Field were on their feet in the ninth inning when Humber threw three straight balls to Michael Saunders but held on to strike him out.

“When you have a four-run lead, you don’t want to walk the leadoff guy out there, no matter what the situation is,” he said.

“Falling behind 3-0, I felt myself kind of overthrowing a little bit. But I was able to get it back over the plate.”

Brendan Ryan then came to the plate pinch-hitting for Munenori Kawasaki.

Ryan stretched the count to 3-2 but his attempted checked swing was ruled a strike by plate umpire Brian Runge.

The ball got away from White Sox catcher A.J. Pierzynski, but he found it behind him and with Ryan unsure of Runge’s call fired to Paul Konerko at first base.

Ryan, disgusted at Runge’s call, tossed his helmet in the dirt.

Konerko’s solo homer off Blake Beavan in the second inning had given Chicago a 1-0 lead. The White Sox added two more runs in the third and one in the ninth.

Humber, who pitched his first complete game in the majors, needed just 96 pitches.

His total for the fourth, fifth and sixth innings was a stunningly low 20.

“A lot of credit goes to A.J.,” he said. “He did a great job of calling pitches today and blocking a lot of balls in the dirt and our offense came out and gave me some runs early, so it was a really good win on top of everything else.”

In his only other start this season, against Baltimore five days ago, Humber threw 115 pitches in 5 1/3 innings.

“There were a couple of balls there that were hit hard,” said Humber.