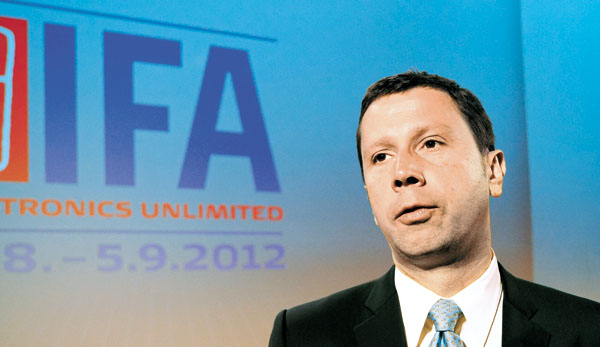 
DUBROVNIK, Croatia - Jens Heithecker, global executive director and vice president of Messe Berlin Group, carries business cards that have Korean text on one side and English on the reverse.

Handing them out to a dozen Korean reporters before a group interview on April 14, the German executive of the host of the annual IFA consumer electronics and home appliances trade fair in Berlin said he has Chinese and Japanese language versions too, a good sign of how crucial the East Asian markets are.

In particular, he mentioned Samsung Electronics as one of the most successful models of an Asian sourcing firm that grew into a global giant.

At the upcoming show, scheduled from Aug. 31 till Sept. 5, Samsung Electronics will have one of the biggest booths (65,000 square meters), while its rival LG will have one almost the same size.

Coway, the nation’s largest water purifier producer, will be there too. From Japan, participants will include Sony, Panasonic, Sharp and Yamaha, while China is set to bring in some of its more ambitious brands.

Q. Are Korean companies enlarging the size of their exhibition spaces at the IFA?

A. We will have more Korean companies than we originally expected but there will be no big area expansion.

How about Chinese manufacturers?

They are not expanding their areas this time. They try every year to bring better products to the market. A lot of manufactures are located in China and some of the best products are made in China by Chinese companies. But they don’t have their own strong brands globally at the moment, although they try to invest and build them up.

What do you think of the prospects for organic LED TVs, which Korean appliance makers are focusing on?

In dollars it’s $10,000 or more. Those consumers to whom money doesn’t matter will buy it - but for most consumers they’re too expensive. When the economies of scale kick in with more manufacturing, then it will be on the mass market in several years.

What do you think of the ongoing patent battle between Samsung and Apple?

Such things are happening between Google and Motorola, Microsoft, Sony and Samsung.

But we all, even companies, are not amused about this trend.They are not competing over technical stats, design, marketing but about licenses and patents.

It doesn’t make sense in this industry. Every wireless phone needs specialized standards and usually there are cross-licensing agreements between companies.

As it was for MP3 players, competing companies are free to use the licenses and patents of each other and that makes sense in this connected world. Consumers ask for common standards. It’s part of their rights.

Will there be a chance to see Google at the IFA?

Google doesn’t fit as an exhibitor and I don’t expect it to be an exhibitor in the future either. But we consider it a partner since its software is in the products already on display at each booth.

Do you have any advice or expectations for Korean companies exhibiting there?

Not for Samsung. Samsung is doing excellently. It’s a good, successful company next to Apple in the worldwide market - especially if you realize that Apple is not active in other businesses like consumer electronics. We are happy that Samsung is in our show.

What I have learned from Samsung’s case is that they set goals that are clear and focused.

And they are fast when it comes to carrying them out. Every other company wants to follow its example - the way Samsung does marketing and develops networks, its retail and distribution structures worldwide.

It may take five to 10 years for others to follow.