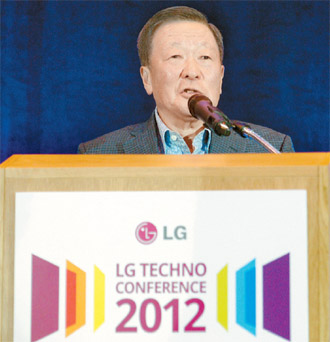 LG Group Chairman Koo Bon-moo went to San Francisco yesterday to recruit research fellows for R&D centers belonging to the group’s subsidiaries. This is the first time the group’s chairman has personally recruited job seekers since he took office in 1995.

Koo had dinner with conference attendees and promised that LG Group would do its best to encourage its employees to show what they can do best.

“The future of LG Group depends on R&D,” Koo said. “[We] will provide the best environment for talented employees so that they can show their best performance.”

The chairman has emphasized the importance of securing quality manpower in the past and encouraged executives to pay extra attention to recruitment.

“If we don’t plant seeds now, we can’t expect to see anything in three or five years from now,” Koo said in a New Year’s speech earlier this year. “We should think in a way that the hardest times [economically] can be the best opportunity for recruiting talented individuals.”

Koo mentioned late last year that he would personally recruit new employees to the company.

“The CEO should personally visit places that have talented individuals in order to recruit them,” Koo said when he was meeting with top executives and LG’s human resources department.

At the event in San Francisco, there were around 300 Korean students studying for master’s and doctoral degrees in materials engineering, electrical engineering, chemistry and other scientific areas. Subsidiaries of the group held recruitment consulting sessions on site.

Around 40 major executives of the LG Group subsidiaries, including LG Chem CEO Kim Ban-seok, made presentations about their companies’ technological achievements and their plans for expanding R&D.

LG Group plans to hire 320 new employees who hold master’s or doctoral degrees from overseas institutions this year. The number of overseas degree holders within the group has been increasing as it hired 120 in 2007 and 300 last year.