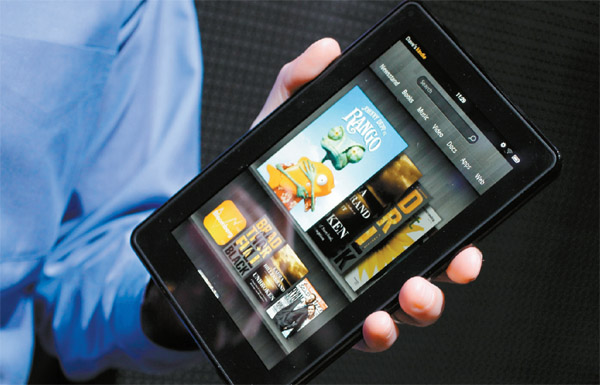 A Kindle Fire is displayed at a news conference in New York. Apple has successfully fended off competitors who have tried to sell tablets in iPad’s size range. But last year, Amazon figured out how to crack Apple’s stranglehold. [AP]

There’s a constantly spinning mill of rumors about Apple products, most of which turn out to be untrue. What’s unusual this week is that talk has revived of a smaller iPad model, an idea company founder Steve Jobs derided publicly a year before he died.

Apple and its suppliers aren’t commenting. Rumors of a smaller iPad, or “iPad mini” have percolated ever since the first iPad was launched two years ago. This time around, they’re fed by media reports from Korea, China and Taiwan, saying Apple has ordered Samsung screens that are 7.86 inches measured on the diagonal. That would make for a screen about two-thirds the size of the current iPad, which has a diagonal measurement of 9.7 inches.

Why it’s a good idea

A smaller tablet would help Apple further its lead in the tablet market.

“From a competitive standpoint, we believe an iPad mini with a lower price point would be the competition’s worst nightmare,” says Shaw Wu, an analyst at Sterne Agee. “Most [competitors] already have a tough enough time competing against the iPad 2, as well as the new iPad.”

Apple has successfully fended off competitors who have tried to sell tablets in iPad’s size range. But last year, Amazon figured out how to crack Apple’s stranglehold on tablets by making a half-size, no-frills tablet. The result was the Kindle Fire, which sells for $199. Amazon has sold millions of them.

Apple sells the iPod Touch for $199, but its screen is about a quarter of the size of the Kindle Fire - a big disadvantage for people who want to enjoy books, movies and games. It also sells the older iPad model for $399. It has nothing in between.

Price isn’t the only reason customers might prefer a smaller tablet. A seven-inch model would fit in many handbags, unlike the current iPad.

Wu says he’s seen evidence of Apple experimenting with both smaller and larger tablet screens since 2009, and doesn’t sense that the release of an iPad mini is imminent.

It could be hard for Apple to make money from an iPad-quality seven-inch tablet that sells for $299. Analysts at IHS iSuppli estimate that a smaller tablet would cost around $250 to produce, a figure that doesn’t include development costs, packaging or patent royalties. That suggests Apple would price it at $329 or $349.

“The first thing you always have to keep in mind is: Apple is not going to sell an unprofitable product,” says Rhoda Alexander at iSuppli.

Why it’s a bad idea

A smaller iPad would be a headache for software developers.

“Going to a different screen size ends up being a ton of work,” says Nate Weiner, the creator of Pocket, an application that stores Web pages and other material for later reading.

“If you take, for an example, an interface built for the iPad and try to cram it into the Kindle Fire, it just doesn’t fit,” he says.

However, developers who have already adapted their programs to the Kindle Fire or other seven-inch tablets wouldn’t face a big hurdle in adapting to a third Apple screen size, Weiner says.

Apple’s late CEO made a rare appearance on an October 2010 earnings conference call to launch a tirade against the seven-inch tablet Samsung Electronics was set to launch as the first major challenger to the iPad.

He said the resolution of the display could be increased to make up for the smaller size, but that would be “meaningless, unless your tablet also includes sandpaper, so that the user can sand down their fingers to around one quarter of the present size.”