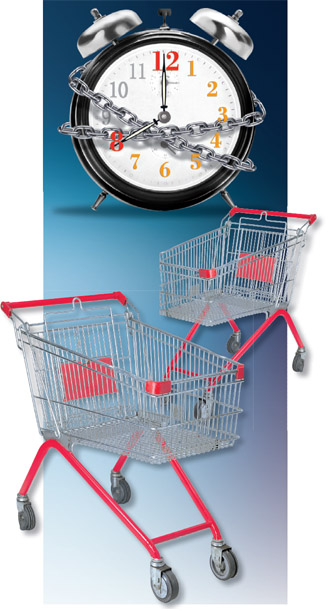 Visitors to Lotte Mart’s Jamsil branch in southern Seoul were greeted by an empty parking lot and a “closed” sign yesterday, an experience that will be repeated numerous times across the nation as the revised Retail Industry Development Act goes into effect.

Of the 365 discount store chains operated by E-Mart, Homeplus and Lotte Mart across the country, 114 stores were closed yesterday under the new regulations designed to protect mom-and-pop businesses from corporate competition. And 345 out of 1,061 super supermarkets, smaller neighborhood-style outlets run by large discount chains, were shut down nationwide. Under the law, large stores must close two days every month, with the specifics decided by local councils, and cut hours for 24-hour stores.

Though the new rules have yet to be fully implemented, store owners and most shoppers seemed flatly annoyed, paying little attention to the purported goal of protecting small businesses. And on the first day of implementation, at least one traditional market reaped little benefit.

At the Saemaeul traditional market, 1.15 kilometers (0.71 miles) away from Lotte Mart’s Jamsil store yesterday, business was slack, with few customers perusing the stalls.

“I thought this mandatory holiday would help me earn more profits, but today’s just like a normal day,” said a merchant surnamed Kim who sells vegetables at Saemaeul. “Who would come to a traditional market to shop in this rainy weather?”

One effect the new rules do seem to be having is angering consumers, who seem only to notice that they cannot do their weekend shopping as usual and change the time they shop instead of the place.

At 8:30 p.m. on Saturday, the Jamsil Lotte Mart was crowded with people trying to get their shopping done before the government-imposed shut down.

“I usually come here on weekends because my work normally ends past 9 p.m. on weekdays,” said Shin Ye-ra, a 31-year-old company worker. “It’s even hard to move around my shopping cart today because all the aisles are packed with people. It wasn’t as crowded the week before.”

When similar ordinances enforced by local governments began to be enforced from March 11 starting in Jeonju, the outcry wasn’t pronounced as the shutdown only applied to super supermarkets. With popular big box stores from E-Mart to Lotte Mart now being closed, consumer discontent seems to have risen.

Yesterday, some stores in Seoul, Gyeonggi, Daegu, Gwangju and Jeonju had mandatory closings. In Seoul specifically, 12 outlets in Gangdong, Songpa, Seongbuk and Gangseo districts were closed.

“What’s the point of closing stores on every other Sunday? Shouldn’t the government also protect rights of consumers?” complained Park Hye-rim, a 34-year-old office worker also shopping at the Jamsil Lotte Mart.

Saturday sales jumped at the discount chain stores as consumers stocked up before closing day and retailers rushed to get items off their shelves that would expire before doors reopened today. Homeplus’ Jamsil store saw a 20 percent increase in sales compared to last week. And shelves emptied at Lotte Mart, where Saturday sales were 9.4 percent higher than last week, as employees announced discounts to move merchandise. “Get a bag of fresh lettuce at 500 won [$0.44]!” shouted a Lotte Mart employee, who was replacing each bag’s 1,200 won price tag with a 500 won tag.

The area was quickly crowded with homemakers who didn’t want to miss a bargain.

When asked why they decided to brave the crowd on Saturday instead of moving their Sunday shopping to traditional markets ? as the new law intended ? customers at Lotte Mart said they preferred the more comfortable surroundings.

“It’s more convenient,” said Lee Jin-seong, a 36-year-old company worker. “In the summer, we go to discount stores because they run air conditioners. We stay longer at stores in the summer to stay away from heat on weekends. Traditional markets have poor air conditioning systems.” And Kim, the vegetable seller at Saemaeul, recognized that some simply don’t like shopping at traditional markets.

“I still hope more people will come to us next time when big retailers are closed on the fourth Sunday of the month,” Kim said. “To make that happen, we should improve our market’s facilities to lure consumers in their 20s and 30s who don’t like shopping here.”

Anticipating losses up to 3.4 trillion won per year, three of Korea’s big retailers aren’t happy with the new regulations, either. The Korea Chainstores Association, which represents them, asked the Constitutional Court to nullify the new law in Feburary. In the meantime, stores have rolled out promotions to keep the won rolling in, even when their doors are shut.

Customers can now earn double points on purchases at grocery stores on Thursdays, Fridays and Saturdays. Retailers are also giving discount coupons to customers who order groceries at retailers’ online stores on Sunday, though there’s no same-day delivery.

E-Mart is beefing up its online mall and plans to increase the number of available items to 500,000 from the current 140,000. Other retailers are also following the suit.

Homeplus started opening some of its stores an hour earlier at 9 a.m. instead of 10 a.m. and other stores might follow.

“We don’t expect the changed opening hours to significantly increase our morning sales,” said Seol Do-won, executive vice president of Homeplus. “We’re doing it as a means to serve customers who are inconvenienced by the mandatory closures.”