Gyeonggi governor says he will run for president

Gyeonggi governor says he will run for president 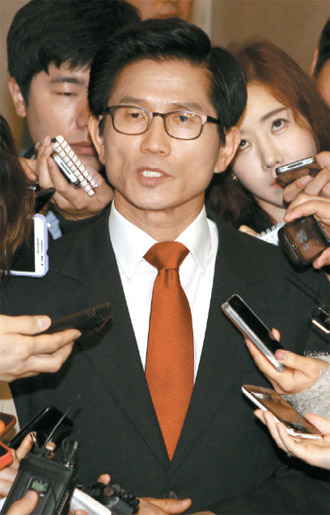 Gyeonggi Governor Kim Moon-soo announces his candidacy at a press conference yesterday at the National Assembly. By Kim Hyung-soo

The 61-year-old former labor activist and current governor of Korea’s most populous province is the first in the ruling party to declare candidacy.

…
“Some dissuaded me from running in the race, saying it would be like throwing eggs against a rock,” Kim said at the National Assembly.

“Although I agonized over whether I am qualified as the president this era desires, I am determined to lead the way to change our great Republic of Korea into a greater nation.”

Since the April 11 legislative election that saw the ruling party maintain its majority in the Assembly, interim party leader Park has consolidated her power and is seen as a formidable presidential candidate.

Some party members are even saying a primary isn’t necessary, with polls suggesting Park would win the nomination in a landslide.

But Kim has entered the race under the pretense that Park is not capable of beating the liberal opposition in the December election.

Kim suggested the Saenuri Party adopt an open primary in which citizens cast their ballots regardless of party affiliation.

“I think an open primary is the best way to gauge the competitiveness of candidates,” Kim said.

The Gyeonggi governor, aware of the tough competition he will face in the primary, began distinguishing his policies from those of Park and depicted the interim head as exerting too much control over the party.

“A political party is not a private caucus controlled by followers of a certain leader,” Kim said. “I’m deeply concerned about a situation in which the ruling party is privatized by one person, which will distance the party away from the desires of the people.

“I am different from Park in a lot of ways, such as in the way we live our lives,” he stressed.

Kim said he will tender his resignation soon to concentrate on his presidential campaign. If he steps down, a gubernatorial by-election will be held on the day of the presidential election.

Few saw the Saenuri Party hanging on to its majority when Park assumed emergency leadership of the then-Grand National Party after a string of scandals. But the April 11 performance did reveal vulnerabilities.

Although the party swept more than half of the regions, including Gyeongsang, Gangwon and Chungcheong, it won only 43 seats out of 112 in Seoul and Gyeonggi, with many Park loyalists ousted.

These regions will play a pivotal role in the presidential election because they are heavily populated and are home to young swing voters who are sensitive to current affairs.

Speculation is rising that a number of Saenuri Party members outside of Park’s circle will declare candidacy and challenge the interim leader’s grip.

One of the dark horses is Chung Mong-joon, a seven-term lawmaker who won in Dongjak B District, southern Seoul.

Another figure is Lee Jae-oh, a key Lee Myung-bak loyalist and a former minister without portfolio. The five-term representative from Eunpyeong B District in Seoul met with other Saenuri Party members outside of Park’s circle last week and told them, “We can’t win the presidential election with the expectation of a mainstream Park. If all of the party’s candidates have a fierce competition through an open primary, it would be worthy.”

Kim Tae-ho, a former candidate for prime minister, is also emerging as a potential runner. He earned a reputation after winning in Gimhae, South Gyeongsang, defeating a former aide to late President Roh Moo-hyun in Roh’s hometown.

He also expressed his discontent with the Park-dominated ruling party, saying in a recent interview with local media that the idea of depending on Park’s fame is “an arrogant thought relying on power. Those with such an idea are ruining the presidential campaign.”

He didn’t say he will run in the primary in an interview with the JoongAng Ilbo, but did say the Saenuri Party “should achieve victory in the presidential race and my role in the procedure is always open.”

Recent polls suggest the approval ratings of those challenging Park remain around 1 to 2 percent, lagging far behind the frontrunner.