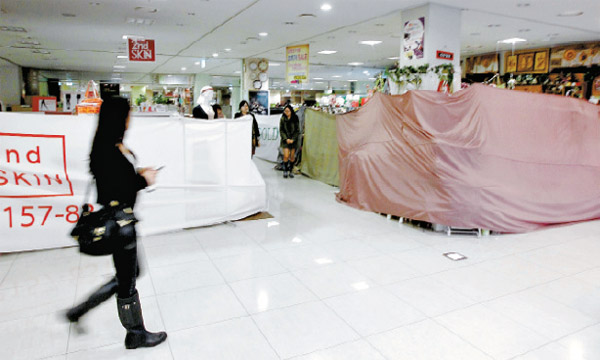 A customer passes a store closed because of the dearth of customers on the ground floor of a shopping mall at the Garden 5 shopping mall complex in Jangji-dong, Songpa District, eastern Seoul. By Ahn Seong-shik

Sunday afternoons are rake-it-in time for most shopping malls. But on the ground floor of the 10-story shopping mall called Garden 5 Life in eastern Seoul’s Jangji-dong, Songpa District, Sundays are as dull as any other day of the week. About 40 out of 210 shops were opened on a recent Sunday, their staff waiting for customers that just don’t come. About 100 were unoccupied, waiting for tenants. The remaining 70 were occupied - but closed.

“We only turn on the lights because we get a 150,000 won ($132) monthly subsidy from SH Corporation, the state-run construction firm that invested in Garden 5, if we keep our shop open at least six hours a day,” a 65-year-old merchant surnamed Kim told the JoongAng Ilbo. Garden 5 is a large wholesale and retail complex planned by President Lee Myung-bak while he was mayor of the Seoul Metropolitan Government. The idea was to create a major wholesale and retail market along with new homes for the merchants who lost their shops when reclamation of the Cheonggye Stream in central Seoul began in July 2003.

The stream’s reclamation was a highly successful (and visible) feat of urban renewal. But the twin project at Garden 5 has thus far been a dud.

Garden 5 was built on 250,000 square meters (138.3 acres) of land, about six times bigger than the footprint of COEX in Samseong-dong. The total cost of the project was 1.3 trillion won and the complex opened in June 2010. It consists of five glossy glass buildings that were supposed to be home to shops, recreational facilities, entertainment, a home electronics distribution complex and a wholesale market. At the beginning of the project, the city government predicted that about 150,000 customers would visit Garden 5 every day. Currently that number sits below 35,000.

Garden 5 has 8,360 retail spaces, but about 1,300 are empty. “Garden 5 has failed to attract merchants and customers because it is located in a region that is hard to access through public transportation. The business district around it is not well-developed, either,” said Democratic United Part lawmaker Choi Jo-woong of the Seoul Metropolitan Council. “It’s kind of like a ‘Dead 5’ now.”

SH Corp. has now spent 17 trillion won of debt on the Garden 5 project, or 70 percent of the city government’s debt.

“We totally admit the project was a failure,” a spokesman of the city government said. “We are currently providing solutions for Garden 5.”